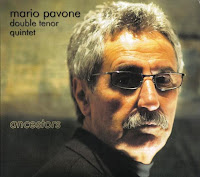 Bassist Mario Pavone has been in the forefront of modern jazz for the last four decades, and even if many of his generation got stuck in the style for which they were once in the vanguard, Pavone has kept evolving, and still does. He is most known from his collaborations with Paul Bley first, and Bill Dixon later, then Thomas Chapin, yet his own Nu Trio/Quintet and sextet bring his music, in an always very recognisable style. That style consists of a strong rhythmic drive, often in a thundering mode, with tight arrangement around complex, often angular, themes, then followed by his full trust in his fellow band members to improvise in line with the mood and theme of the piece. And in order to do that, he managed to have a great selection of musicians to play in his bands, with first and foremost Tony Malaby on sax and Peter Madsen on piano. He played a lot with Matt Wilson on drums, but here with the equally stellar Gerald Cleaver. Jimmy Greene on tenor and soprano completes the quintet. Pavone is a wonderful bass-player, a real driving force of melody and rhythm, and he is the absolute backbone for all tracks. The third track "Tomes", a typical Pavone composition, illustrates this well. The bass sets the tone of this uptempo piece, the band plays the theme, the bass and drum then propulse the horns forward, relentlessly, first Malaby, then Greene, then Madsen, but listening to Pavone's bass and Cleaver's drums in support of the solos is as fun to hear as the solo itself, they're all in the frontline, adding things, changing things, never content to repeat the same patterns. Same thing with "Iskmix", a fast and nervous rhythm provides the foundation for a slow horn theme, that moves on in great contrast to the abstract and wild piano lines of Madsen, then halfway the quintet comes beautifully together as a kick-off for a furious bass solo, followed by a double intertwining sax solo, ending in quiet resignation. "Arc For Puppy" has this great contrapuntal sax theme, quite dramatic in its development and orchestration, the saxes are a little fiercer than on the other tunes, full of heated tension. I will not describe all tracks, but the music is clever, carefully composed, fast and nervous, full of surprises and drama, with great improvisations by a star cast of today's jazz musicians. If New Age music can be labeled as horizontal music (something happens and it barely changes till the end), then Pavone's music can be qualified as vertical music (something happens and it keeps changing all the time), full of agitated depth and creativity. I like my music a little more free, but for the post-bop modern jazz fan, this album surely is a must.