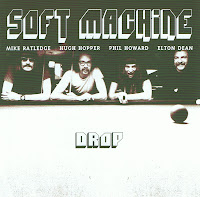 Well, then here's something unique to end the year with, and to start the year with. This is a performance with the rare 1971 line-up of Soft Machine, with Mike Ratledge on Lowrey organ and electric piano, Elton Dean on saxello, alto sax and Fender Rhodes, Hugh Hopper on electric bass and Phil Howard on drums, and especially Howard's presence makes this performance one to savor. After so many years, it all sounds very early 70s, with obvious influences from the electric Miles Davis, John Coltrane's mid-60s period, but also vaguely reminiscent of Weather Report, adding the psychedelic elements of the Canterbury rock scene. The method is simple : a complex theme, with changing rhythms and tempi, with always hypnotic rock bass and drums, with the organ creating the unity and structure, over which the sax soars and howls, alternating with wild organ soloing : more often than not a wall of sound which sounds tribal and sophisticated at the same time, with the various themes flowing one into the other to create suite-like music. You often have the impression that they knew how to start the piece, and then anything could happen, but their discipline and interplay keep this music within safe boundaries. Two of the tracks come from their famous "Third" album: "Out-Bloody-Rageous" and "Slightly All The Time". The other tracks come from the later to be released "Fifth", on which Phil Howard plays the drums on the first side of the LP: "All White", "Drop", "Pigling Bland", "As If", "M.C.", yet all tracks fuze into one long piece on this live date. It is clear from this recording that Howard's violence on the drums, together with Dean's free jazz excursions create quite some tension with the more structured approach by Ratledge and Hopper, but on this album, rather than creating conflict, it leads to absolute fireworks.

It is hard to believe, but this jazz band definitely had the same status at that time as a rock band, with performances on television pop programs included. Steve Lake writes in the liner notes : "Der Spiegel (a German weekly magazine) ran an article on the band's genre-transgressing popularity, pointing out that 50,000 copies of 'Third" and "Fourth" had been sold in the previous twelve months in Germany alone". Indeed totally incredible to believe, if you listen to this music. What would it take today to get this kind of audience for genre-transgressing music?
This is the way fusion could have gone into, if it had maintained this raw, hard-driving, wild rock attitude performance approach to sophisticated compositions.

Watch the Soft Machine with "Out-Bloody-Rageous" with a 1970 line-up.