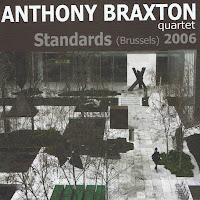 Since the beginning of his solo career, Anthony Braxton apparently needs to move back to a more traditional environment, starting with "In The Tradition" in 1974, yet I have the impression that his standards releases are increasing over the years, especially in this century, but possibly in equal proportion to the rest of his impossible-to-keep-up-with output, with releases such as"8 Standards Wesleyan", "20 Standards (quartet) 2003" album, the "23 Standards" album, there's now "Standards (Brussels) 2006", a nice 6-CD box with a 20-page booklet with texts by Italian author Erika Dagnino. The concept of a "standard" is also flexible in Braxton's mind apparently, with pieces such as Charles Lloyd "Forest Flower" and George Russell's "Exx-Tethics" also falling into the category. The original performance captured in this box was played on four consecutive nights in a Brussels bar, with an Italian trio consisting of Alessandro Giachero on piano, Antonio Borghini on bass and Cristiano Calcagnile on drums.

The repertoire has pieces by Gershwin, Fats Waller, Antonio Carlos Jobim, Thelonious Monk, Wayne Shorter, ... with a totally different play-list for each evening. Sure, it is mainstream, the music flows along quite smoothly, post-boppish, with the three Italian musicians doing an excellent job, and Braxton plays along, he is possibly the one going the most outside the compositions, yet not too often, and - to his credit - he lets his band-members lots of space for soloing. The audience is fully involved, quietly listening, and applauding and reacting nicely. The best tracks are the ones on which the band turns the standard inside out, literally then, as on "Exx-Tethics", which, after the bass solo, moves into eery avant-garde territory, first getting rid of rhythm and harmonics, then re-building it with a hypnotic piano phrase and great sax-playing by Braxton.

I am not too sure whether the sequence of the tracks on the CDs correspond to the performance itself, but it is clear that on discs 5 and 6, the band seems to be more tuned to one another, which creates more possibilities for a broader freedom of approach. The "standard" still gets usual mainstream attention till halfway down the piece, and usually after the piano solo, for a second, free-er version to start, yet again ending in the main theme. The Gerschwin brothers would possibly have a hard time recognizing the second part of their "Strike Up The Band", a track on which also Giachero turns wild. Throughout the sets Braxton's alto gives a light, shimmering atmosphere to the music, which is further reinforced by the subtlety of touch of the accompanying trio. This is music which sounds relax at moments, intense at others, structured and free, played by a band that clearly enjoys the music they're playing as much as how they can make it their own.

One downside of the box is that, even if the performance was recorded live, some tracks end in fade-outs, leaving the somewhat frustrating feeling that there is no reaction from the audience, but that's just a minor comment on an otherwise impeccable set with excellent sound quality.

PS - the box indeed gives the George Russell composition the title "Exx-Thetics" instead of "Ezz-Thetics". Thanks Walter for pointing this out!