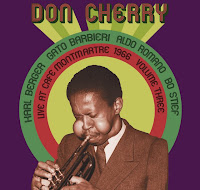 ESP records did a great thing last year to re-issue the two previously recorded performances by Don Cherry, issued by Magnetic Records. Those performances were made at the Club Montmartre in Copenhagen, Denmark where Don Cherry resided for a month in 1966. The band here is the same as on the two other recordings : Don Cherry on trumpet, Gato Barbieri on sax, Karl Berger on vibes, Bo Stief on bass and Aldo Romano on drums. The performance on this CD was not released before, and it is chronologically the first one. The two tunes on it are actually part of the same suite, called "Complete Communion", which is the title track of the studio recording made earlier on Blue Note. Cherry was a joyful person, a spiritual person, open to the world and to new ideas, and often with an attitude of "anything goes". All these characteristics are already apparent on these early recordings. His "suite"-like compositions consisted of previously agreed themes that were launched by him, then there was improvisation until he started with a new theme. These sudden shifts sometimes take the other musicians by surprise, as can be heard especially on the live recordings. The sound quality and the "arrangements" if one can call it that, are much better on the Blue Note studio recording, but the live performance has this open attitude allowing for less perfection, but with a higher sense of authenticity, and joy of the musical interplay, and that is clearly demonstrated also by the more open structure of the pieces and clearly also by the total lack of restraint with which Barbieri plays sax (there clearly was no producer present to make him consider sales!). This openness allowed also for the easy introduction of other themes, as he does here, adding a theme by Antonio Carlos Jobim in Complete Communion and adding a theme by Ray Brown in "Remembrance", the second track. There is not much new to be heard, and for those who don't know Don Cherry's early work, I would still recommend the Blue Note release, but for Don Cherry fans, this one is a great addition to the Montmartre series.