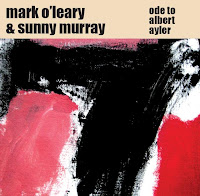 This is the second duo recording of Irish guitarist Mark O'Leary on Ayler Records, the previous was with Han Bennink, this one with Sunny Murray, two totally different drummers in terms of style. Murray has surely more souplesse and is surely less hard-hitting, playing a more supporting role than Bennink did on "Television". The recording itself goes back to 2002, during a tour of Ireland. The album consists of three long tracks, with two short pieces in between. O'Leary has developed his music in the meantime, but there are some fantastic moments here. Especially when the spirit of Ayler descends on him. Ayler was raw, wild, fierce, brutal even at times, tearing down all the elements in music that could hinder any direct straight-from-the-heart authenticity, and by doing so, he created a spiritual sensitivity, ripped to its barest essence. O'Leary and Murray do that too, to a certain extent, and that's when they are at their best: when there is an unrelenting drive, as on "Albert", the first track, together with the last one the best piece on the album. O'Leary really goes wild here, especially towards the end, sounding more like McLaughlin in his early period than Ayler, but well, it's certainly great. "Body Politik" is more jazzy, more gentle, until halfway, when some distorted guitar brings about a change in the piece, speeding up the pace, moving more into rapid-fire fusion-like guitar. '"Spiritualized" is a short acoustic piece, offering a kind of breathing pauze, before the pièce-the-résistance begins, called "Axiom", a pieces that starts slowly again, with nice polyrhythmics from Murray, and gentle, sensitive playing by O'Leary, but then tension rises, as does the tempo and the speed, with both musicians going totally giving themselves. So, while the music is not bad, the format is a little repetitive, and some of O'Leary's phrasing too. As said, he has grown better since then.