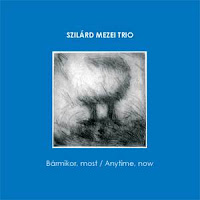 Last year Serbian violinist and viola-player Szilárd Mezei released a quite succesful album combining wind, strings and percussion instruments for quite an interesting musical exploration. Now he's back with fellow compatriots Ervin Malina on bass and Istvan Csik on drums. Mezei's approach to music is an interesting mix of rhythmic and melodic composed elements, with references to modern classical, bop and European folk, interlaced with avant-garde improvisations. His viola has a raw, yet warm sound, and is really at the center of the music, determining the sound, the development of the pieces and the structure of it, while the bass and drums generally placed in a supportive role, although luckily not always. The nine pieces all have their own coherent focus, despite the excursions made here and there. But what is mostly astonishing is the permanent slow to mid-tempo pace, totally unhurried, and lacking much of the nervousness you would expect from jazz. And even on the mid-tempo tracks, the three musicians take their time to build up, to elaborate, to solo, ... what they bring is the opposite of instrumental pyrotechnics, despite their obvious skills, using few notes to tell the story, focusing all of the listener's attention on the qualitative impact of the tonal shifts and thematic development, giving the whole album a quite dramatic sound, full of pathos.

The immensely-talented Mezei continues to wade 'under the radar' of creative music here in North American circles. Sadly.

He is quite a talent and his deft skills in a small ensemble environment utterly radiate through on this CD. Highly recommended !