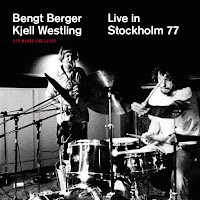 Swedish drummer Bengt Berger will always generate my interest, even if not all of his albums are worthwhile, but to have produced one masterpiece in a lifetime is already a stellar achievement, and I'm talking about "Bitter Funeral Beer". Here he is joined by Kjell Westling on sax for two long pieces of free jazz improvisation. The piece is easily identifiable as typical for the free jazz of the seventies, with lots of direct musical influences and references from traditional jazz, folk music and Middle-Eastern scales. I must say that Berger is excellent throughout, keeping up a relentless polyrythmic drive. Westling keeps up with him, producing some great soloing, although at times the lack of ideas force him into including tunes he's familiar with, including even Offenbach's French can-can tune! With the two tracks clocking in at close to 20 minutes, that's understandable, but it reduces the quality a little. Same thing with some of the Middle-Eastern scales, which are nice, but not really explored to the full, as if he's not too willing to leave the comfort zone. Now, that being said, with a seventies perspective, he possibly went way beyond what the audience thought was comfortable to listen to. Despite the hesitations, and these little downsides, it is still a pleasure to hear, and a good thing that it's been re-issued.