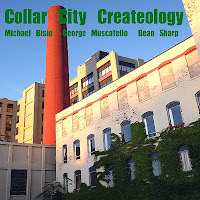 Michael Bisio is a bassist to savor : rich in timbre, creative and precise in his playing, yet strangely enough he records only every few years. He is accompanied here by Dean Sharp on drums and George Muscatello on guitar. The first three tracks have a vague structure and theme, but with sufficient foundation to allow for focused improvisaitons, with gentle and soft-toned playing, almost chamber-like jazz, despite the drums. The fourth track, "CX3" brings us into a more avant-garde, free improv environment, with all three musicians at their exploratory best, musically and in the use of extended techniques on their instruments, bring a wilder, yet open and light-footed journey. From then on, the music keeps that lightness, becoming fragile, with Sharp's percussion barely present on some tracks, unless for some precise emphasis once in a while. Muscatello's playing is also very soft-toned, and very precise too. One track, "Parabello", is a little more uptempo, yet with a halting rhythm, gaining momentum then loosing it completely for some interesting trio interactions, minute, intense, until the tempo gradually picks up again for more streamlined postbop improvisation. And that's the mode in which the album ends. This gives the overall feel of the album a strange evolution from post-boppish chamber-jazz to more avant-garde and back to its origin. As Michael Bisio writes in the liner notes : "These works are not "free form" but are freely formed by the individual and collective consciousness,( and subconsciousness), of the artists involved." The playing is nice throughout, subdued and gentle, yet captivating. All three of them deserve wider attention.

Listen and buy/download from CDBaby.

For those of you who are interested in geographical detail: the Collar City in the title is Troy, NY, called that way "due to the 19th century proliferation of detachable collars for mens shirts which were manufactured there. A city of varied ideologies and productivity, two other leading exports,(in their time), were pig-iron and ladies of the evening".