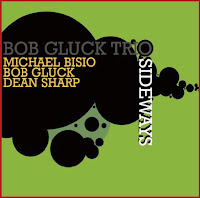 It was only last week that I reviewed "Collar City Creatology", a trio with Michael Bisio on bass and Dean Sharp on drums. We find them back on this trio, yet the third party of the trio is now Bob Gluck's piano. Gluck is a well-trained pianist, who started taking lessons at the age of seven, then stopped after college, not playing for two decades, and starting again in 2003. The music he presents here is free, yet guided improv. The pieces are based on original compositions, two by Zawinul, one based on a Zawinul composition ("Pharoah's Dance") and one by Ornette Coleman ("Lonely Woman"). Most other tracks are credited to Gluck, with one to Bisio. The music is open-ended, with lots of possibilities hanging in the air, some realised, some deliberately avoided, creatin tension along the way, with lots of close interaction and musical subtleties. Bisio and Sharp are stellar again, but the real credits should go to Gluck, not only for his playing, but for the musical vision he sets down here. Regardless of who composed the pieces, they form one integrated whole, in a suite-like fashion, often darkly atmospheric, gloomy in its slowness and its attention to detail. Like many other new bands, including Gerald Cleaver's recent "Farmers By Nature", the piano trio as it was known, has clearly been re-defined. The concept of a lead instrument with two accompanying rhythm instruments has become obsolete. We get a trio of three equal instruments creating a "total sound", a broad listening experience, that does not need to rely on melody, but comes to its full effect when the musicans' creativity leads us into new territory. Apart from one solo piano piece, the trio format is a little broken when electronics come into play, or some ambient sound, and even Gluck playing shofar. There is some extended playing too, but fairly limited. Which is good. The main focus is on the music, not on the effects. And the trio's version of "Lonely Woman" is brilliant. Ornette Coleman's beautiful tune is fully in sync with the rest of the album's desperate tone, full of shattered hope, and deep longing for a better world. Great music. I truly hope to hear more from this trio in the future.