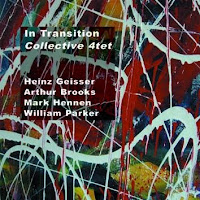 To be honest, I did not know this band, despite the fact that they have been performing since 1994 and that they had released five albums so far. Their music is as free as the wind, wild, fierce, agonizing, but also strong, coherent, sensitive, with all four musicians sharing the same vision and sense of focus. The band consists of Arthur Brooks on trumpet, Heinz Geisser on drums, Mark Hennen on piano and William Parker on bass. Brooks is the replacement of trombonist Jeff Hoyer, who had been with the band since its creation, and who died in December 2006. I am sure his memory was with the musicians when playing this album. I cannot compare with their previous work, but the music that is to be heard on this album is breathtaking. The first track starts slowly, contemplatively, building up an edifice out of sparse notes, somewhat reminiscent of Other Dimensions In Music, but as the piece evolves, momentum builds up, leading to the second piece, that has this incredible drive, propulsed forward by the rhythm section but especially by Hennen's piano, whose relentless thundering is as energetic as it gets, with Brooks filling in perfectly on trumpet, adding the emotional voice, the shade and the color to the rest of the band. Throughout this musical tidal wave, melodic lines come and go, are picked up by some band members, then replaced by others, new forms arise, played with, transformed and replaced again. The storm also subsides at moments, leaving room for a slight breeze, with subtle phrasing and interaction, yet no less intelligent, with the four instruments interlocked while keeping the music open. And that's how the album ends, in a slow, abstract intense piece, full of calm and tension, alternating meditation with more power-driven moments, but all within the same open framework. A wonderful feat, and a beautiful one.

Listen to a sample from Synopsis