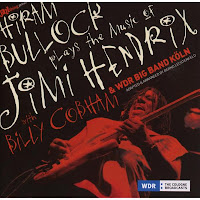 The three great musicians of the last century all three came to their peak in the 60s: John Coltrane, Miles Davis and Jimi Hendrix. In the totality of human musical history, you can forget about the rest of twentieth century composers, but not those three.

The disadvantage of that position, is that all kinds of third rank wannabees play tribute to them in the hope that the mere mention of the genius's name is sufficient to generate sales.

Same here: Hiram Bullock demonstrates that :
- he knows how to play guitar, but the concept of music is alien to him
- he has understood nothing of Jimi Hendrix' music
- playing with a big band is not easy
- he has bad taste.

I truly hope this album doesn't sell, although that's not a nice thing to say.

Ouch! Haven't heard the album, and quite sure it is horrible. But you do know this is a posthumous release and Hiram Bullock was a big New York session guy (David Letterman, Sting, more) who died last year? (Not that it makes this CD any better.)

True, now I remember having read that he passed away. I'm sorry I forgot about this. That still does not justify to make this ill-advised tribute album.

"In the totality of human musical history, you can forget about the rest of twentieth century composers, but not those three."

Yes, forget all those guys. Well, maybe not the Beatles...