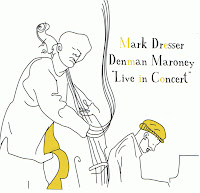 This is the third duo album by bassist Mark Dresser and pianist Denman Maroney, after "Duologues" and "Time Changes". In contrast to some of the other material by the two players, this one is fully improvised in three long pieces. The first 30 minute track was recorded live at Vision Festival on June 10, 2008, the two other pieces date from a performance in Chicago in 2001. It's hard to call this jazz, since none of the two plays anything which ressembles anything which could fit in a category. It is music that evolves, following its own logic of feeling, interaction and sonic pallette: highly unpredictable yet very focused. Maroney's "hyperpiano" becomes a different instrument in his hands, with all kind of materials muting the strings, vibrating along, or any other kind of bizarre sound that can be extracted from your standard piano. The new sounds that are created push Dresser along on the same route, re-inventing the bass as well. This does not mean that this music is experimental per se. Art is at the center of what they do, using their skills to generate feelings and intellectual play, with at times even beautiful passages, and through all the sonic novelty, jazz, blues and classical music emerge, like wisps of memory, in a great synthesis of sound. It is better than the two previous albums, soberer and richer at the same time, and strangely enough more focused despite the difference in recording dates.

Listen to a sample from "Ediface".

Listen and download/buy from CDBaby.