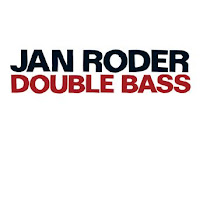 The art work of German bassist Jan Roder's latest album says it all. As it is. Jan Roder. Double Bass. There is nothing more to be said. The musician. His instrument. The physical touch. The possibilities. The choices. The music. I have this thing about solo bass CDs. Why? Maybe because it's not a solo instrument. Maybe because it's unwieldy. Maybe because of the depth of its sound. Or the warmth of it. The result is often fascinating. The naked struggle of a man with his instrument. The muscularity. The emotion. Roder is physical in his touch. He plucks and bows hard, yet remains sensitive. You can tell what joy he feels under his fingers when he plays. The trembling of the strings. The scraping of the bow. He moans and murmurs along at times. You need to be good to keep attention going. He manages to do that. Varying a lot. Going deep. Sometimes intimate conversations, as in "Dek Du". Sometimes adventurous expressivity, as in "Dek Kvar". Sometimes with extended techniques, as on "Kvar", but not too much. Just to change approach a little. Explore the possibilities. A man and his bass. It's good we can be part of it.