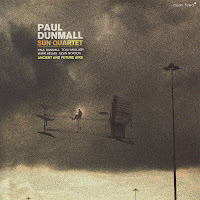 Usually I read the liner notes only after listening to the music, just to avoid influence. The imagery that came to mind when listening to this album was one of quietly floating water, something untangible, elusive and ever changing without actually losing its form. It floats quietly onwards and onwards, taking turns, going through some rapids occasionally, and ending in the most quiet possible context, when it reaches the ocean, all beatiful and peaceful. Now I read (also in the title, you stupid!), that it's about air, and that fits even better. The band consists of Paul Dunmall and Tony Malaby on sax, Mark Helias on bass and Kevin Norton on drums and vibes. And oh, I almost forgot, Dunmall also plays bagpipes in the middle of the long first piece. But don't run away. It doesn't sound like Mull Of Kintyre, not by a long stretch. It sounds like overblown tenor.

Both saxophonists are easily recognizable on the album: Malaby is an emotional lyricist and Dunmall a raw spiritualist, and their tone is totally different, but even when both are playing on tenor, their match is perfect, intense and warm. And their improvisation brilliant. It is extremely difficult to remain coherent for close to 50 minutes, but these guys manage this well, even if there is not much focus in the piece, but that's clearly not the purpose and it would have destroyed the effect too. Now, you're taken along on a trip (air or water) through varying moods, levels of intensity, but always with the greatest of attention to the interaction. Helias and Norton too add greatly to the overall sound. The interaction between Malaby and Norton after about 30 minutes is of the same high level as Dunmall's duet with Helias some five minutes later, and here is an ear-opener for drummers too: listen to Norton's drum solo, light as a feather, subtle as the wind. And he has the same approach when playing his vibes, with the softest touch, adding color and depth, without creating a real presence. Together they create a vision of wide expanse, in the best Coltrane sense, but lighter even, broader. With no sense of melody, no rhythm despite the variations in intensity, yet so lyrical, so fluent, so sensitive, this music is totally free.

The second short track, sounds as an encore for the enthusiastic audience at the Living Theater, and also as a kind of lullaby for the fearless, all sweet and eery.

Listen to an excerpt from "Ancient Airs"

It's not about "air," but "airs," as in songs, like Resphigi's "Ancient Airs and Dances." Anyway, great blog.

Clean Feed is having a sale(!),so I'm looking through your consistently x-lent reviews for guidance...