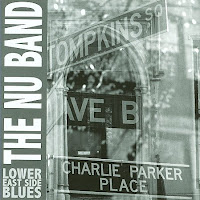 One of the best free bop bands of the moment is without a doubt The Nu Band, with four seasoned musicians who are as comfortable in the most complex jazz traditions as in the adventurous sonic explorations of nowadays, mixing them with rhythm, soul, spirituality, a deep-felt sympathy for humanity, a strong dose of political criticism, joined with humor and self-relativation. The Nu Band is Mark Whitecage on sax and clarinet, Roy Campbell on trumpet, Joe Fonda on bass and Lou Grassi on drums. The album starts with the boppish title track, in hommage to the place where Charlie Parker lived and worked, with a strong bass vamp and a nice theme, a great springboard for the musicians to start their respective solos from. The second track is more ambitious, penned by Joe Fonda for Mark Whitecage, and called "In A Whitecage", a slow exploratory piece offering both horn-players a framework to interweave their solos, moving in and out of the theme, moving from unison to echoing each other to different phrases to full separate improvisation, with a long bass solo by Fonda making the bridge to "The Path", the piece's second part, which is equally sensitive, but much sweeter. "Connecticut Solution", has a more middle-eastern rhythmic feel, an environment in which Campbell feels extremely comfortable for his slow bluesy, stretched, muted notes, so deeply felt that it gives me the goosebumps. While Whitecage and Fonda perform strong solos, Grassi's percussive power throughout this piece is stunning : economical and rich, creating a wonderful synergetic feel with the repetitive bass-line, and especially during Fonda's solo. Grassi's compositions for "Drunk Butterfly", "The Last Of The Beboppers", gets its cover here too, and so does his much older song "Avanti Galoppi", which was already covered on several previous releases but still maintains its great forward-propulsing rhythmic drive, the rhythm section quadruple-timing the piece's slow theme, a challenge for the horns to keep the slowness going, a delight for Fonda who clearly enjoys the speed, then almost brings it to a standstill during his own solo, only to get the galopping speed back up for the finale. "Heavenly Ascending" is again a slow, march-like piece, with Fonda's arco leading the way into a soulful and heartfelt suite ranging from very open-ended moments, to joyful unison phrases, wildly chaotic interactions, but ending again with the serene arco. This album will not change your life, nor will it alter music history, but it will offer you all the musical joy you can expect from great music and wonderful musicians: it is rich, soulful, spiritual, fun, varied, expressive, moving, elevating .... Highly recommended.

But now that George Bush is gone, who will these guys rage against now????

Listen to an excerpt from "Connecticut Solutions"

Thanks for the audio clips! You're doing an excellent job with your blog! Thanks from Rochester, NY.