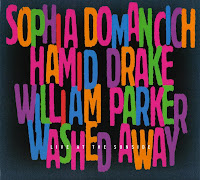 French pianist Sophia Domancich loves Ornette Coleman's "Lonely Woman", just like me, and despite her limited output as a leader, this is the third CD on which she brings the tune. She played it earlier with her band Pentacle and in a duo with Simon Goubert, but here is assisted by the best of the best rhythm section, Hamid Drake on drums and William Parker on bass. The performance was recorded live at the Sunside in Paris in July of last year. Domancich herself is a a long background, having played lots with the Canterbury scene musicians, such as Pip Pyle, Elton Dean, Hugh Hopper, Didier Malherbe. From the little I had heard of her music, it was slightly left of center, but not much, but here, in combination with Parker and Drake, she improvises freely and openly, without boundaries and restraint. The first track "Washed Away" has a boppish backbone, with nice improvisations, the second track, "The Seagulls of Kristiansund", is a Mal Waldron composition, which starts with impressionistic piano, but through his solo, Parker leads the tune into a totally different direction, without altering the overall sound, keeping the gentleness of approach, but making it more organic, less structured, and interestingly enough Domancich takes up the challenge, joining Parker and Drake in their more avant-gardist approach, and slowly moving them back to the impressionism of the beginning, while Parker picks up his bow to add to the melancholy. But of course the highlight is "Lonely Woman", a piece she knows inside-out, here spread over 36 minutes (beating the Cojaniz/Schiaffini performance of the tune by 1 minute), which gives ample space to the three musicians to move through the theme's moments of wonder, surprise, playfulness, anger, melancholy and sadness. In the course of the lang track the focus tends to get a little bit lost, moving the piece into a freeboppish improvisation.

Buy from Instantjazz.
Listen to an extract from "Lonely Woman"

Free Jazz is a bunch of bullshit, invented for the sole purpose of making phoney white liberals feel culturally smug about their own lack of imagination. On top of all that, the musicians don't need to practice, play in tune, or even keep the form, or play on the chord changes. The whole thing is a fraudulent bag of horse shit. Peace, I'm out.