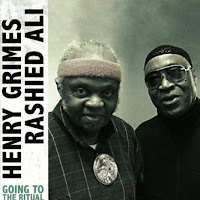 Rescued from oblivion, and given a second jazz life by William Parker, Henry Grimes is one of the icons of jazz bass in the sixties, having played with everyone from Benny Goodman to Albert Ayler. And Rashied Ali is possibly best known for his work with John Coltrane in the last period of his life. Since Archie Shepp's "On This Night" (1965), both Philadelphians had not played together again, but here we find them back in this unique duo setting, more than fourty years later, for an improvised set of fresh and open-minded jazz. Both musicians play full of controlled fervor and passion, obviously enjoying the chance to interact creatively. Ali is careful enough not to drown the bass in the volume of his drums, choosing to play losely and supportively, and when Grimes picks up his softly screeching violin, Ali becomes even quieter. But the sound is at its best when Grimes plays arco, which gives the music more voice, more volume, allowing for a more powerful interaction, as on the longest third track "Gone Beyond The Gate".

In the second and fourth track, Grimes recites one of his poems, giving a sense of conceptual unity to the album. Grimes has been writing poetry all his life. You know what I think of poetry in jazz, but nevertheless, it does not spoil the fun.

Despite the limitations of the setting, the two veterans manage to bring a captivating piece of music, fresh and open.

Listen to and buy from Porter Records.