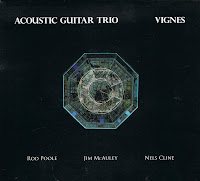 Unless you heard Rod Poole, Nels Cline and Jim McAuley's Acoustic Guitar Trio CD, released on Incus in 2002, you will probably never have heard guitar music sounding like this one. The three musicians are the same, but this performance was recorded live on Vignes Street in Los Angeles in 2003. All three musicians venture into the microtonal universe that British guitarist Rod Poole explored obsessively, playing on an open-tuned instrument played with a bow. All three musicians are also very pre-occupied with sound, like a painter can relish the physical qualities of paint, or a sculpture of stone. All three musicians do not really belong to a musical tradition, having set aside such notions about genre. Yes, Cline is best know from his rock music, but that would be very limitative to describe his work. McAuley has a more folk sound, but again, that is not doing credit to his skills. And Poole apparently was in a category all his own. "Vignes 1", the long first improvisation, starts calmly, in a rather conventional way, but moving forward, a repetitive, rhythmic one-chord basis sets the tone for the two other guitars to fill in the empty space, creating a weird hypnotic piece, dark and light, or heavy and light if you wish, with varying levels of intensity, but inherently paradoxical, ending in almost silence, where structure and rhythm are completely abandoned for pure sound exploration, recognizable, though not always, as coming from a guitar. "Vignes 2" rebuilds improvisational density, atonal, but rhythmic, with all strings creating again a strange surreal universe, like curtains waving in the breeze, attached to nothing but the imagination. "Vignes 3" brings the trio's sense of adventure a step further, with Poole starting to use the bow on his strings. It doesn't sound like Jimmy Page, or even Raoul Björkenheim, but it has a screeching quality which some will call painful, some nerve-racking, some beautiful, or possibly all three of them. It will certainly not leave you indifferent. The performance was recorded by Poole, who was unfortunately killed in 2007. Apparently there is more material left by him and by this trio. Although this music is surely not to everyone's taste, the trio's musical explorations and the new dimension given to acoustic guitar playing clearly deserves even more releases.

Listen to an excerpt from "Vignes 3"