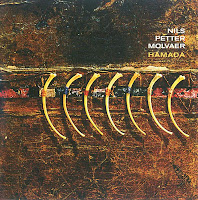 Norwegian trumpeter Nils Petter Molvær deserves the credit for renewing jazz by going beyond fusion, to a more sophisticated musical environment with electronics and sampling. I have always liked, and still like, his earlier work with Khmer, but then he manoeuvred himself into a dead end street, repeating himself over and over again in trumpet atmospherics, which are by themselves nice as background music, nonintrusive but also not very expressive, nor especially rich musically. On this album his main sparring partner is guitarist Eivind Aarset who also does some programming, and on two tracks Audun Erlien joins on bass and Audun Kleive on drums. Sampling specialist Jan Bang adds his material on three tracks. This album is a little calmer than some of his previous recordings, and only two pieces, "Friction" and "Cruel Altitude", have the energy and drive of his early work. All the other pieces are nice and sweet with long trumpet phrases of a landscape of electronics and guitar. It's still nice, but it's also time for further explorations.