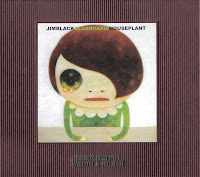 With AlasNoAxis, drummer Jim Black created his own substyle in jazz. Rock-influenced rhythms and rhythm section form the basis for the beautiful, almost naive melodies that flow out of the sax and the guitar. Apart from Black, the rhythm section comes from Iceland, with Skuli Sverrisson on bass and Hilmar Jensson on guitar, the sax is played by Chris Speed. For those familiar with the band's former records, there are no real surprises to be heard. The music keeps its great pulse, its sweet melodies, and its deliberate contrast of powerful drive with niceness. It sounds like emo rock or alt rock with the sax taking over the role of the voice. There is no real soloing in the jazz sense. It is rather a build-up of layers of composed structures that create a musical effect, gripping and moving at times. The music sounds simple and accessible on the surface, but there's actually a lot going on, changes in tempo, rhythm, structure and sound coloring that are well thought through, adding a level of complexity which makes this music nice to listen to repeatedly. And the quartet are four absolutely stellar musicians, but they play fully in the service of the music itself, not to display their skills, and in that sense the music is totally unrelated to any fusion. AlasNoAxis have carved out their own place in the jazz rock world, one that is interesting to follow. But this guy prefers it rawer.

Listen to an excerpt from "Malomice".