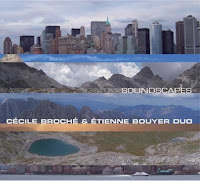 There aren't that many sax-violin duos in jazz, and with the exception of a Leroy Jenkins and Joseph Jarman album, I wouldn't even be able to name many more. But that the combination can work well, is clearly illustrated by this record. Cécile Broché is a Belgian electric violinist, teaming up with French soprano and tenor saxophonist Etienne Bouyer for no less than fifteen short duets. Some of those are excellent, little miniatures that despite their short length still manage to create a world of sound, that combines classical with jazz and world music influences. The two musicians are wonderful instrumentalists, very disciplined and playing with a superb clarity of tone. On the downside, the album is a collection of pieces that lack unity. Some pieces, like "Page Blanche", but especially "Jezerca", have a quite dramatic beauty and a novel approach, while other tunes, such as "Molvanian Dance" are part of the almost obligate balkan-influenced hipness, or have poetry in them (OUCH!), or are inconsequential, such as the light-footed boppy "Isi Bop", nice but the kind of music that has been played to death by so many others. On "Könnyu Darab # 5", Broché demonstrates that she can sound like Hendrix on electric violin, but again, it brings a totally different approach to the music, and again a stylistic break in the album. The record also contains a short version of Ornette Coleman's "Lonely Woman", with vocals, played solo by the violin. A little more coherence and unity of musical vision would have made this a great album. Just delete five of the tracks and you have it.

Listen to an excerpt from "Jezerca"

The best one's I've heard are by
Mike Khoury and Piotr Michalowski.
"Shards" is hard to find(but worth it)and the latest,"Reason Sound/Sound Reason" is also excellent,and can be found at CD Baby.

Mike Khoury has renewed my interest in "jazz" violin...