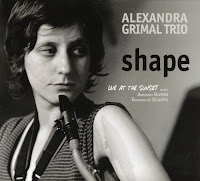 To be honest, the first track of this album mesmerized me, sucking me into a weird musical world, and it kept me in that state till long after the album stopped, mainly because of the unusual combination of sax, hammond organ and drums, playing some incredibly intense, highly uptempo almost a-rhythmic music, which has a kind of strange halting drive, like it wants to move forward yet gets dragged back the whole time, like running without moving. Alexandra Grimal plays the sax, and how, with all her heart and body, stunningly, sensitively. Antonin Rayon plays the organ, creating some weird aural landscape, uninhabitable at times, often inhospitable, rarely sweet, while Emmanuel Scarpa does the drumming, breaking all possible patterns while keeping the drive going (how does he do that?). Especially on the long first track "Mouvances", this leads to some great listening experience. Something totally new, yet also attractive, powerful and sensitive at the same time. The second piece, the one-minute long "En Silence", captures the essence of the music: dark, somewhat industrial, yet fragile at the same time. This vision is further expanded upon in the long "Le Sang N'Est Pas Bleu" (the blood is not blue), a slow and equally depressing piece, on which Grimal's high soprano is the only light in the darkness, yet then she switches to tenor, and her wailing becomes deeper, more desperate. At times it's hard to categorize this music as jazz. The sounds produced by Rayon and Scarpa are more based on rock tradition, creating an atmosphere that is in essence alien to jazz, but one in which Grimal's playing fits perfectly. And as the lead voice, she is the one defining the music, its evolution, its sound, its otherworldliness, its agonizing terror, its intense expressivity, its vulnerability. What a voice for a debut album : strong, full of character and what a powerful musical vision! Highly recommended.

All the best - Joe

I realize I am late with this comment, but I just got this in the mail on Friday, and it is indeed amazing. The first and third pieces are almost hypnotic, and the playing is so intense.

Yet another CD I picked up solely on Stef's recommendation, and I haven't been disappointed yet.

This is not exactly an easy CD to track down, but I just received mine in the mail today and am excited about it. The CD can be found at this seller at a reasonable price...