The Rempis Percussion Quartet - The Disappointment Of Parsley (Not Two, 2009) **** 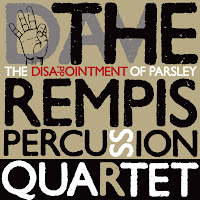 I have rarely heard a live CD that starts so powerful as this one. After a short intro, the whole band dives in full throttle, no holds barred, full of energy and drive, full of self-confidence and without hesitations, slow-downs or any other deviations: onward and forward, no matter what. The train driver is Dave Rempis, on tenor on this piece, with Anton Hatwich on bass and with the double drums of Tim Daisy and Frank Rosaly. After six minutes Rempis shuts up and leaves his locomotive in the hands of the rhythm section, full speed, onward and forward, and when Rempis re-joins, what started as a boppish tune, now swirls into full swing, with his expressive horn borrowing from tradition in a wild rollercoaster of a free solo, relentlessly, keeping up the powerplay without slacking down, but then yes, it comes to a halt, unavoidably, after eighteen minutes of madness. On the second piece, Rempis switches to alto, for a piece which is the exact opposite of the first one, slow, sensitive and calm, first solo, then joined by arco bass and gently the percussion enters the tune as well. The third piece starts with polyrhythmic drums, for a free form piece, more abstract, totally unpredictable, and it is only after about ten minutes that a steady vamp gets going, giving the tune a more traditional foundation for the music's development, yet it slows down into a quite kind of intermezzo, with the four musicians softly bouncing off ideas, gently, sensitively, slowly gathering volume, and speed, ending the tune again in a paroxysm of sound, to the general satisfaction of Alchemia's enthusiastic audience.

Listen to an excerpt from "The Disappointment Of Parsley"

Ah, I'm really looking forward to this one, thanks for pointing it out. As for Rempis: absolutely one of my favorite sax players of the moment. He consistently delivers on the V5-albums and he's also exceptional on the Rempis Quartet album I bought a while ago. Still need to check out the Triage-stuff. If he keeps playing, working, developing like this... he's gonna become one of the giants of modern jazz, imo

I've got this cd and listened to it many times. I really like it and I'm looking forward to see and listen Dave Rempis with these musicians on stage in May:)