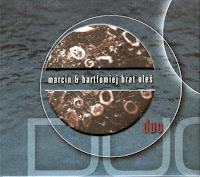 The Polish Oleś brothers, Marcin on bass and Brat on drums, are like the William Parker and Hamid Drake from Europe. They can play in any environment, with any musician or line-up, playing strong and in line the other musicians' musical vision, yet still sounding like themselves: creative, rhythmical, lyrical. To hear them play with just the two of them, as they do here, is a real treat. And if you think that a line-up of just bass and drums is a little too limited to be captivating or gripping, think again. I could give several examples, but just take "Skrik" (sampled below), and listen how Brat's drumming, next to being absolutely rock solid, adds variation and accents in support of his brother, while changing in the meantime the piece by moving from a very light touch to the lower sound of his toms and bass drum, herewith mirroring the dialogue that the bass is holding with itself, between the bowed high notes, contrasted with a single deep tone. The result is one of plaintive drama, full of tension and suspense hoping for release. And then listen again to assess how much can really be heard, just played by two instruments that are traditionally only in support roles.

During the album, they move from Ornette Coleman influenced pieces ("Betula"), tracks with a boppish bass vamp à la William Parker ("Lukacs"), klezmer ("Jewisher"), African polyrhythmics ("Afrik"), to more adventurous abstract pieces ("Avalanche"), and whatever the style, the quality is superb: balanced, rich, with lots of feeling. Each piece is not limited to the exploration of one melody or theme, it contains a wealth of ideas, the opening of new possibilities, going beyond predictability, creating new angles and approaches as you move along. There are moments that I was wondering whether the drums were overdubbed, which is not the case. Add to that a high recording quality which gives the music a very crisp and clear sound, as if they're playing in your living room. William Parker and Hamid Drake also recorded a duo CD ("Piercing The Veil"), but they added a whole arsenal of additional instruments, here you get the real stuff : just bass and drums, but Goethe's line "in der Beschränkung zeigt sich erst der Meister" (it's only within a context of strict limitations that a true master reveals himself) has never been more true. This is definitely not a record that will only please drummers and bass-players, this album should appeal to all music lovers. It is fun, expressive, moving, adventurous, melodic and accessible. Don't miss it.

Listen to an excerpt from "Skrik"