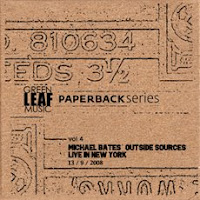 When I heard Michael Bates' debut album in 2003, I was thrilled by his specific approach: not too far left from the mainstream, which makes his music quite accessible, yet sufficiently adventurous and creative to surprise the listener, to add little ideas, integrate elements from the jazz tradition but also from other genres such as modern classical and folk music, and then twist them into something new, but then in a very intelligent and sensitive way. Over the years, his band, "Outside Sources", with Russ Johnson on trumpet, Quinsin Nachoff on sax, and Jeff Davis on drums, has even become better, and this live date, recorded at a performance at the Cornelia Street Café in New York this past September is really great. The "live" aspect is not really dominant: you hear the audience only once at the end (except for some clattering cutlery during Bates' bass solo on "Simple Interlude"), but the directness of the performance, the little emotional extra that deepens the sounds, both on the wild as the slow moments, is typical of a live date. The two opening tracks "Bloodletting", and "Russian School", come from his latest album "Clockwise", together with three other tracks "Machinery", "Fellini" and "Damasa". Not only are Bates' compositions exceptionally good, so is the band. Russ Johnson and Jeff Davis are their ususal excellent selves, as is Bates, and I think this is saxophonist Quinsin Nachoff's best performance with the band so far. Only two tracks are new, and although the performance is good, the pieces do not differ all that much from the studio recordings. So, if you don't have anything from this band yet, this album will make an excellent introduction. If you already have Clockwise, you must really have loved it, to buy it again in a live version.

Listen to an excerpt from "Lucifer", one of the new pieces.