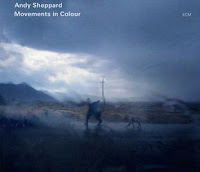 I know Andy Sheppard first and foremost from his trio collaborations with Carla Bley and Steve Swallow, little gems of modern jazz, and easy to recommend. I only have two albums he released under his own name, "Nocturnal Tourist", and "Dancing Man & Woman", two albums which bring a mix of styles and genres, with fusion, world music and modern electronic influences. Now on his debut on ECM, the British saxophonist moves this personal aesthetic into the ECM range, softening the edges a bit, slowing down the tempo a notch, and increasing the sound quality. Here too, world influences abound, not only because of Kuljit Bhamra on tabla and percussion, who adds an Indian flair, but also because of John Parricelli's Spanish guitar sounds, with Eivind Aarset's guitar and electronics throwing a more modern flavor into the mix. Arild Andersen plays the bass. Without a doubt the quality of the delivery is excellent, not only because of the skills of the musicians, but also because of the perfect production. But that does unfortunately not lead to great music. It is taking no risks, but then really no risks at all. The result is something that might have been played by dozens of bands, maybe not with this level of execuction, but certainly with the same lack of inspiration. The old recipe: if you lack ideas, open your bag of skills, mix them up, and something new may come up. Yet the end result is often a bland soup, not very spicy, lukewarm, something you can swallow without any risk of either burning your lips, throat, or having steam coming out of your ears. And like soup, it doesn't fill the stomach, and it makes you hungry for a real meal. There's no substance, no musical statement, no personal vision. So, sentimental stuff, with possibly commercial ambitions, but clearly not musical ones. What a disappointment, because Sheppard is a delicate player with great skills.

Listen to an excerpt from "Nave Nave Moe"

Although I myself am not an Andy Sheppard fan I have read many articles and interviews with the man himself, he seems to be a very nice guy who genuinely believes in his music and also respectful of other peoples music. I think that to say that Andy Sheppard is just making music (however uninteresting for some people) 'with possibly commercial ambitions' is not really his style.

I don't know the man. I've seen him play, and indeed he seems like a nice guy. I'm just saying that with this album he seems to give in to commercial ambitions, and I may be wrong, but it sounds like that to me.
stef

Knowing and loving ECM music is very different with other jazz musics and respectfully I think you are not only the hard core fan of ECM musics but also you are not the fan of that at all. Yes.

I don't have any doubt that you heard a lot of ECM music but clearly you don't follow it like so many other fan lovers like me (I'm 44 but I persuade the ECM from 22 like insane). Feel and sense of ECM musics is far more different than the other jazz musicians or jazz companies.

Let me clear the thing. So many of artists who worked outside of this company (at the beginning) some then decide to record an album their. I've seen so many time that the first debut for them is far more better, deeper and unique in every aspect than the older albums. Because of the taste and color of the music of this company as I said above are very different with other jazz company.

In the other hand, their is Mr. Manfred Eicher (the ECM legendary producer) who only decide and approve and let the music step in that those music (more or less) have the taste and stereotype of the company. That is we see ECM albums have a vast and at the same time unique taste for all their records like no other companies on the globe.

SO, how can the first debut of an artist like Andy Sheppard be a poor or beyound that be for commercial purpose, it is so much outrages. and every one (who knows ECM) knows that ECM is not a commercial company or something like that AT ALL. Other companies with more than 1500 records and 40 years working history are surrounded by the big money like other similar companies.

The other place (ecmreviews.com) Tyran Grillo, the respectful reviewer write at the end of his review for this album: "By far one of ECM’s best of the new millennium."

and in here, you call this debut of an artist like AS at the ECM "commercial"
Great!!!

By the way sorry for English. It's not my first language.