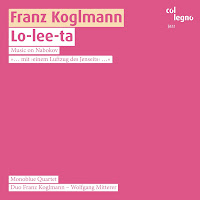 Austrian trumpeter Franz Koglmann plays within a category of his own: a sensitive intellectualist, an eclectist fusing classical music with soundtrack and jazz, breaking the boundaries between music, literature, theater and poetry, unafraid to explore new directions, not always successful, mixing a kind of romantic German darkness of approach with intimacy and drama, sweeping emotions with delicate compositions. Half of his work I really can't listen to, the other half is quite interesting and even beautiful. This album falls within the latter category. It is structured around his quartet and duo performances with pianist Wolfgang Mitterer. The quartet consists of Tony Coe on clarinet and alto, Ed Renshaw on guitar and Peter Herbert on bass, a band he's been performing and recording with quite actively in the past years, and their interplay is really a treat. The album is dedicated to Russian American author Vladimir Nabokov, best known for his "Lolita", a wonderful stylist and explorer of human emotions. No wonder Koglmann pays hommage to him. The fourteen tracks, of which 6 duets, demonstrate the leader's broad musical baggage, and the band manages to keep it quite coherent in approach, despite the variations in mood, now slow and sad, then sometimes even joyful, and despite the variations in style, sounding very jazzy in a traditional way, then avant-garde, or sometimes just sounding like the musical accompaniement for a movie, which is actually the case for the first piece, which is the "Love Theme" from Stanley Kubrick's "Lolita". As usual, Koglmann's sense of style and structure go a little bit at the expense of the emotional expressivity, but overall it's one of his best albums so far.

Listen and buy from Col Legno