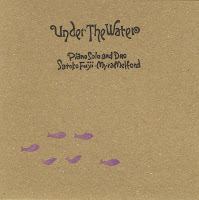 Piano duets are very rare. Satoko Fujii already had one in the 96 with her teacher Paul Bley, called "Something About Water". Now, thirteen years later, she releases an album with Myra Melford, called "Under The Water". The reference to water is of course not a coincidence. Also, on of Myra Melford's bands is also called "The Same River Twice", alluding to Greek philosopher Heraclitus' saying that you can't bathe in the same river twice, because the water is different all the time. Here too, it is all about the natural flow of things and the flux of the music. My personal problem with piano duets, as with a double tenor sax or trumpet front line, is that you try to identify who does what, instead of just enjoying the music. But the difference in this case is not all that difficult, most of the times. Fujii has a more percussive attack and is more angular in her improvisations, while Melford is more impressionistic and often uses klezmer scales in her improvisations. This album brings actually only three duets, with Fujii and Melford each playing a solo piece. The Fujii composition "Trace A River", from the album with the same name, is still a favorite of mine, and it's nice to hear it again in a solo format, as it loses nothing of its strength, even without bass and drums. Melford's "Be Melting Snow" comes from her "Above Blue" album, and has a clear oriental feel to it. When the two musicians play together, the approach is less inside, with the use of more extended techniques, especially on the start of the first piece, until Melford starts the real playing with a romantic sounding klezmer theme, with Fujii plucking the strings, evocating the walk of the hermit crab, which is the title's song, fun and awkward at the same time. The long central piece is possibly the most beautiful tune, called "The Migration Of Fish", an impressionistic, slow improvisation, with some weird excursions into this weird underwater world, sometimes thundering, sometimes with scratching sounds, or with repetitive abstract phrases, or with tightly clustered notes by the right hands, and fast runs with the left, as if some strong current is pulling everything with it, inevitably, inexorably, but the tiny high notes prevail, the fish reached their destination, happily. The last track is darker, heavier, as if danger is around the corner, more abstract, more chaotic too, until suddenly Beethoven's "Für Elise" comes up (Melford?), suddenly, but the heavy chords (Fujii?) crush it quickly and relentlessly, to the enthusiastic applause of the audience.

Piano duets are surely not the most popular format, but in the hands of two masters, they create a wealth of possibilities that go beyond the traditional views on the instrument or of sound even. The CD offers just a glimpse of this. Despite its regular length, I find it frustratingly short.