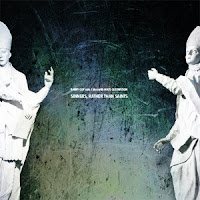 British bassist Barry Guy and Swedish saxophonist Mats Gustafsson have played together numerous times and released albums ranging from duets ("Frogging"), trios (with Raymond strid), quartet (with Strid and Marilyn Crispell) and in Guy's big band. Although Guy clearly comes from a more classical oriented approach to new music and free improv, and Gustafsson has a jazz background, they meet in the common region where instrumental skills and artistic vision meet to create unheard sounds, not as just an experimental gimmick but to tell deep and true musical stories, full of agony, intimacy, distress and friendship. This wonderful vinyl LP, which covers a performance of both musicians at St. Catherine’s Church in Vilnius, Lithuania in January of this year, is a brilliant testimony of how avant-garde can open new worlds of sound that evoke real deepfelt human emotions, that go back to primeval times while being entirely modern at the same time. The album starts with a short and soft, hesitating dialogue between sax and bass, then Gustafsson blows some of the most heart-piercing wails I've heard in a long time, crying his heart out, in full agony, only to calm down again to play some beautiful sweet tones as a wonderful contrast of different emotions all folded into one. The second track is a solo piece by Guy, a nice, almost bluesy improvisation, that unleashes all the inherent beauty that is the very nature of the bass's deep wooden tones, playing gliding chords, arpeggios and single string phrases while maintaining the focus of the tune's calm and resonating melody: sensitive and powerful. We're now eleven minutes further and these two tracks are already worth the purchase of the album. The third improvisation is a duo again, full of nervous tension and distress, with little notes fluttering about, eliciting some shouts of concentrated effort, raising the interaction to an almost physical dialogue. The B side has two ten-minute improvisations, one with Guy solo on bass, one again a duet with Gustafsson. The first starts with Guy's rapid alternating of arco and pizzi, scraping and plucking, getting so many different sounds out of his bass at any given time that you wonder how he does it. But again, the technique is by itself less relevant than the quality of the music, that switches from high intensity moments to more disciplined yet very dark and nervous sequences: an inhospitable universe he creates here, but one that is musically extremely attractive at the same time: raw, engulfing, overwhelming, pure. And Gustafsson joins this universe, fitting perfectly, with piercing screams alternated by deep brooding musings when Guy plays arco, moving to a close to silent intense dialogue in the middle part of the track, and when they turn up the intensity, both move as one, tearing your heart out in the process, figuratively and literally.

Some moments of this album will please instantly, other parts may need repeated listens before you come to appreciate it. There is no beauty without harshness, there is no sensitivity without brutality, now purity without rawness, no reality without sharp edges. And that contrast, or that truthfulness makes this a great album. And sinners have a story to tell, a little more than saints.

I have hesitated to give it a five star rate because it's the second vinyl from vilnius in a row to get this high appreciation, but they repeat what AUM Fidelity did last year: produce some stellar music.

I really like this review, it's very well-written. And I haven't even heard it.
Yesterday I stumbled into a record store in Brussels which sells all the vinyl records from No Business. They ain't cheap, but they all seem worthwhile. I might pick them up one of these days, the Live In Vilnius by the David S Ware Quartet is one of the best albums I recently bought. Maybe I should start a No Business collection :)

An amazing album !!!
Bought it last Saturday during the Mats Gustafsson, Barry Guy, Raymond Strid live gig in KCBelgië (Hasselt) - which easily is one of the best jazz-performances this year!