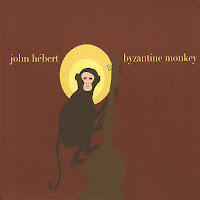 John Hébert is an excellent bass-player whose skillful playing has been at the service of some of the nicest modern jazz albums of the past years, and include collaborations with musicians as diverse as Andrew Hill, Uri Caine, Michael Adkins, Russ Lossing, Gebhard Ullmann and Michael Attias.

On this album Hébert is also accompanied by some of today's best modern jazz musicians, with Michael Attias on alto and baritone sax, Tony Malaby on tenor and soprano, Nasheet Waits on drums, and Satoshi Takeishi on percussion, with Adam Kolker on flute and bass clarinet as a guest on several tracks. But playing with good musicians is not enough to have good music. You still need something to tell musically, and Hébert has it in spades. The intelligent and sensitive creativity of Andrew Hill can be a reference to describe his music, borrowing from the tradition, revering it even, yet using it to create a totally modern vision on composition and sound, not afraid to color outside the lines, or to deliberately use some wayward structures and rhythms, as in "Run For The Hills", or juxtaposing the melancholy theme of "Blind Pig", with some eery background screeching on the cymbals. Another great example is the dark horn intro of "Ciao Monkey", on which Malaby shines, but the rest of the band too, an intro that takes half the piece before rhyhtm emerges, dissolves and picks up again. Unpredictability is the motto here (what do you expect from a byzantine monkey?). So is the long "Fez", a that meanders between structure and free form. Hébert himself is possibly too modest a player and composer. His role is fully in dedication of the music he plays, as it should be, and with the exception of the last two tracks, he rarely brings his bass to the forefront. The highlight of the album is the second track "Acrid Landscape", a really beautiful compositions that has it all, instrumental skills, beautiful sweeping theme, compositional variation, rich in sound and emotional delivery. A strong debut album, it took long to materialise. Let's hope the next one comes sooner.

hi.. just dropping by here... have a nice day! http://kantahanan.blogspot.com