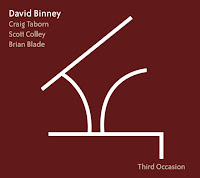 David Binney is one of the rare modern musicians that promote themselves very well. His website is kept up-to-date, new gigs are announced, new albums promoted, with possibility for fans to download even more than what is released on CD. Dave Douglas falls in the same category. I wish other musicians would do the same, it's so much easier for fans and reviewers alike.

But that's of course not the object of this review. It's about his music. Binney is a great altoist, with a track record of albums that vary between rock-influenced, post-bop and electronic excursions. This album falls into the middle category, but with sufficient originality to make it captivating and attractive. His compositional style and playing are light-footed and open, but on this album, a horn section gives a somewhat darker or at least heavier contrast at moments, adding variation to the music. The core band further consists of Craig Taborn on piano, Scott Colley on bass, and Brian Blade on drums, three musicians who complement Binney well. Their sense of subtlety, attention to detail and precision in the playing is very much in the same high league. The brass section consists of Ambrose Akinmusire and Brad Mason on trumpet, and Corey King and Andy Hunter on trombone.

The title of the album is from a passage in Graham Greene's novel The Heart of the Matter (1948). "To be a human being one had to drink the cup. If one were lucky on one day, or cowardly on another, it was presented on a third occasion." There is indeed no wild adventure here, or moments of extreme physical expressivity from joy or fear, but Binney's compositions and the lyricism with which the whole band performs and improvises are really nice to hear. Human beings indeed!