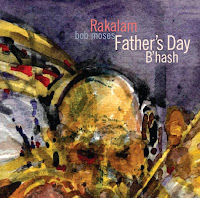 Today is father's day. More than appropriate to review this album by drummer Rakalam Bob Moses, who assembles a large ensemble of music students at the New England Conservatory, due to circumstances when his son, studying sound production, had to make a school project. The recording was mad on June 16, 2006, then Father's Day, which led Rakalam Bob Moses to make this album a tribute to his father, Shompa Lodro, while at the same time celebrating his father-son relationship. The band of students are Ommudra Thomas Arabia on tenor saxophone, Petr Cancura on tenor, soprano saxophones and wood flute, Andrei Matorin on violin, Justin Purtill on bass, Nicole Rampersaud on trumpet and flugelhorn, Luis Rosa on alto saxophone, Stan Strickland on tenor and soprano saxophones, flute, bass clarinet, and vocals, Nick Videen on alto saxophone, and Rakalam Bob Moses himself on drums, piano, and percussion.

The pieces vary between wonderful compositions, especially the opening track "Exhalation 1 (Love)" is a pure beauty of spiritual free jazz, expansive and subdued. Other tracks, such as "Exhalation 3 (Fire Breath)" are built on polyrhythmic composition with lots of African influences, and the wildness and volume of big band. "Pollack Springs" has Rakalam on piano, with percussion and silence, with the band going totally free in the most chaotic chatter imaginable, but falling back into order near the end of the piece. "Father's Day Celebration" is more reverent, more subdued, calmer, and is followed by a drum solo by Rakalam in honor of his father. Other great moments are "Exhalation 2 (Peace)" and "A Pure And Simple Being", the closing track. With this album, the drummer not only created some great compositions but he also gave a number of young musicians the opportunity to demonstrate their skills. Not everything is of the same high level, but some pieces are truly great.