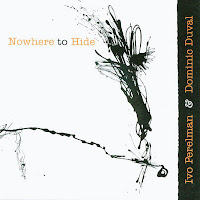 Brazilian saxophonist and visual artist Ivo Perelman has a similar approach to both arts: refined energy and free expressionism in preferably limited settings. The rawness of his sound, just like his paintings come only to their full right if there is no backdrop or even color. It is immediate, introspective and extravert at the same time. Bassist Dominic Duval is possibly the right person for him to interact with musically. A free spirit too and a great listener. Both musicians have played lots of times together, and released quite some albums together before, twice in duo settings, more often in a trio format. Perelman's art used to be more muscular and physical than on this album, blowing hard almost the whole time, but not here. Sensitivity and contemplation are high on the musical agenda, in very long improvisations, one even clocking at a little over twenty-three minutes, but that's part of the fun, and throughout his improvisations, Perelman adds some melodic references to traditional jazz tunes, but then more like acquaintances he meets on a tonal journey and who happen to materialise on the road by sheer chance, totally unlike someone like that other Duval partner, Joe McPhee, who will actually go and look for traditional references on purpose just to meet them and have a chat. Perelman says hello and continues on his journey. Some pieces are quite jazzy, rhythmic even, but some of the other tracks go deep into uncharted tonal territories, with Duval on arco and Perelman exploring the higher regions of his tenor, as on "Eyes And Pearls". Some, like "Polish Poles" mix both, starting quite avant-garde, the tune starts gathering rhythmic momentum as it evolves and becomes jazzy. A nice album for those who like adventurous intimacy.