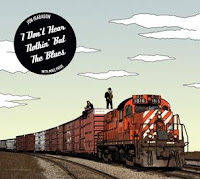 I already praised the saxophonist's skills on RIDD Quartet's Fiction Avalanche CD, and I was not a real fan of his "Outright" band, but really enjoyed the fun of Mostly Other People Do The Killing. Here is he is joined by Mike Pride on drums, whose wildly intense CD Scrambler I reviewed earlier. What the duo brings here is really worth listening to: a fourty-seven minute-long piece of earnest blowing and hitting, racing through jazz, funk, rock and blues rhythms, with slower moments and more uptempo ones, but without releasing the intensity at any moment, full of concentrated interaction, with often the drums leading the dance. Irabagon's playing is highly rhythmic, repeating the same blaring honk time and again (as a motif? as an automatism?), but in between he moves into a broad tonal spectrum of what you can do with a tenor, once in a while shifting into more melodic modes, weaving in recognizable traditional themes, but never for long, because the train they're on keeps rolling on, full speed forwards. This is far removed from Coltrane's Interstellar Space, and certainly not as daring or visionary, don't expect any real sensitive moments either, but the raw energy, the power and the intensity make this a quite captivating performance.