More than eleven years ago, French bassist Joëlle Léandre and American bassist William Parker released their first duo album, of two double basses in a duo format. An unusual combination, that Léandre tested out again later with bassist Barre Phillips. But the latter one was probably the first to have recorded a double double bass album, together with Dave Holland: "Music From Two Basses", in 1971.

Here are some more examples:

And there's the even more unusual bass quartet:
Barre Phillips/Joëlle Léandre/William Parker/Tetsu Saitoh - After You Gone (in memory of Peter Kowald)

Also worth mentioning is of course William Parker's "Requiem" for four basses, in memory of Peter Kowald and Wilber Morris, with Henry Grimes, Sirone and Alan Silva, and with Charles Gayle on sax. 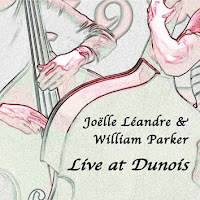 Just for the comparison, I put on their first collaboration too, and in fact the joy they created so many years ago, continues on this one. Free improvisation between two "support" instruments is not an easy task, but in the hands of these two masters, it turns into a play. A play of rhythm, percussive pluckings, subtle pizzi excursions, or mutual support of arco and pizzi. The music is gentle here, less dramatic than on their first release, sensitive and nuanced, rich, more mature, a little less daring and adventurous, and yes, even Léandre's singing is a little more restrained. Léandre's bow can screech and rip right through your chestbone, but it can also envelop you in a warm feeling, playing even melodic pieces, as on the second track, while Parker is surely the more rhythmic, more jazz-oriented, with his habitual very soulful approach. Without a doubt the highlight of the album is the long central track, with lots of arco playing by both of them, more adventurous than the rest of the album, more dramatic too, hypnotic because of its rhythmic propulsion in the lower tones, and which stops a little too abruptly to my taste (and it might have continued for a while!). On the fifth track inventiveness diminishes a little, but the last piece gets an almost shamanistic native American tribal feel, with Joëlle Léandre accompanying her repetitive bowed playing with almost ritual singing, with Parker adding slow warm deep rhythmic tones. Staggeringly beautiful.

If you know of other bass-bass duets, please let me know, and I'll complete the list above, for everyone's education.

Thanks anonymous, read the first paragraph ....

Don't forget the great Harry Miller's 'Children at Play', it's even been reissued on Ogun.

Joesh, Harry Miller's Children At Play is a solo bass album, not a bass duet. But thanks for the tip anyway.

Hi,
i know it's a bit off topic - although you mentioned "Requiem" -, but I just want to ask if you plan to review Joe McPhees's 'Angels, Devils & Haints'?
2x4 rocks, it's nice to see it mentioned.
g

Whoops, I forgot whilst writing that it was bass duets only, I just got too inspired. sorry!

In the meanwhile you can also check out Peter Ind/Rufus Reid 'Alone Together' duo recording, maybe not so 'freeish' but well it's another one on the list. And for those interested in the bass try :

Hi Anonymous, I don't have McPhee's new album yet. It's on my list, and since I'm a great fan of him, I will surely review it.

One of my faves

malachi favors & tatsu aoki came to mind but you have it already. awesome list, keep well and writing, stef! :-)