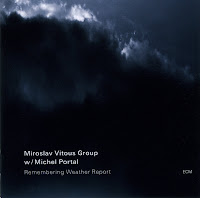 Czech bassist Miroslav Vitous co-founded Weather Report in the early 70s with Wayne Shorter as an acoustic band. They asked Austrian keyboardist Joe Zawinul to join, who after a while wanted the band to become more electric, with synths, and a little more funky, with repetitive bass phrases, something that was not to Vitous' liking, and he quit the band to be replaced by Alfonso Johnson. Vitous is a true virtuoso on the bass, classically schooled, his precision and clarity of tone when playing arco are absolutely awsome, as are his rhythmic and improvisational skills. I am not too sure what the title of this album refers to: about what Weather Report could have been without a piano? how Weather Report could have sounded in a purely acoustic setting? None of the tunes refer back to Weather Report compositions, except to the reference to Wayne Shorter in the title of the first track. In any case, in the liner notes he says it is not the intention to play the music of Weather Report but rather to work with the concept that he introduced in the band at its creation, that of direct conversation and equality between the instruments.

Whatever the ego thing, the music on this album is stellar. It starts with a powerful opener, with Gerald Cleaver's drumming kicking the thing of, and Vitous alternates pizzi and arco on bass, giving the impression of playing two instruments at the same time, then the trumpet of Franco Ambrosetti and the sax of Gary Campbell play some piercing unison phrases, referencing Wayne Shorter's "Nefertiti". There aren't many bassists who are able to give their instrument so much voice, putting it on the same level as a horn. After the great opening track, it gets even better, with a cover of Ornette Coleman's "Lonely Woman", hesitatingly, moving, dark, gripping. But the real highlight is the long "Semina", a suite in three pieces, on which Vitous gives some gut-wrenching, heart-rending and terrifying arco sounds out of his bass, then later equalled by both Campbell and Ambrosetti. "Surfing with Michel" brings an exciting duet between the bassist and French saxophonist Michel Portal. The second pièce-de-résistance is the long "When Dvořák meets Miles", in reference to the great Czech composer and Miles Davis with whom Vitous played in the late 60s. The composition is abstract, dense and complex, moving with bursts of sound, and sounding possibly the most like what Weather Report could have been: very intense, building on the broad musical background of its musicians and hence not limited to style and genre, switching moods from joyful to sad, adding some traditional central European phrases in the mix, in full compatibility with the dark muted sounds of the trumpet, with Cleaver demonstrating his skills of playing around the beat, adding accents, texture and depth. The horns do not really play themes, but rather just a harmonic and rhythmic backdrop for the soloing. The album ends with "Blues Report", a paradoxically joyful sounding melody based on a blues basis.

If this what Vitous had in mind with Weather Report from the very beginning, it's clear that the match with Zawinul was a bad one. And nothing bad of the dead, but it's also clear that Vitous becomes musically better with the years, whereas Zawinul was stuck in his commercial dead-end streat. Don't miss this album. Four brilliant musicians, but especially Vitous' open compositions and free musical vision are fantastic, and you will hear possibly the best arco bass ever played. Let's hope he continues in this vein.

Listen to an excerpt from "Semina"