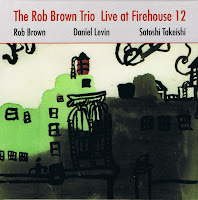 Many years before I started this blog, I already had a kind of bookkeeping file of all my records, with pretty much the same evaluation system, also with a star notation. Of the seven albums that I have of alto saxophonist Rob Brown as a leader (and I know he released more than that), all of them have a four star rating, which demonstrates that, over the years, he not only managed to keep the same high quality of the performances itself, but also that he is sufficiently creative to keep things interesting and new to listeners. On this nice album, recorded live a the Firehouse in November of last year, Brown is accompanied by Daniel Levin on cello and Satoshi Takeishi on drums, the same band that released the great "Sounds" in 2007. Just like on that album, the music is very open, slow, disciplined and almost meditative at moments. The first piece "Quick Be Nimble" starts with an Ornette Coleman-like theme, and with the same stop-and-go kind of feeling, but then it shifts into a more impressionistic mode, letting go of all rhythm and melody, for some beautiful sound coloring, and a nice cello solo, then switching back to the theme, gentle and soft. The second composition is a real treat, with a plucked intro by Levin, the percussion slowly joining with nice bell-like sounds, and a beautiful melody by Brown, lightly dancing, joyful and sweet, but then the tune gets boppish in the middle, gathering tempo and volume, only to get slower again at the end. "On A Lark" is more in the free idiom, sounding totally improvised, but according to the liner notes it was composed. The last piece, "Stray(horn)", is a tribute to Billy Strayhorn (or what did you think?), played with possibly the slowest tempo possible, with alto phrasings by Brown that could fit the jazz of the fifties, but then never for long, because his true art lies of course in free expression and emotional expressivity, restrained yet intense, clear in tone yet powerful too, lamenting and singing at the same time. Brown is a great aloist, no doubt about it. He's a great composer too. And in Levin and Takeishi he found the perfect soulmates to deliver his delicate and free musical vision. The only thing lacking is the audience, where is it?

Listen to an excerpt from "Stray(horn)".