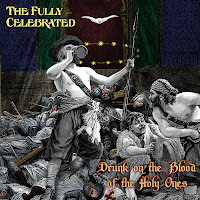 The Fully Celebrated dropped the "Orchestra" in its name, for reasons unknown, because the trio is still the same as they were in 1993, with Jim Hobbs on alto, Timo Shanko on bass and Django Carranza on drums, with some quartet line-ups in between on which Taylor Ho Bynum plays trumpet. The band has always managed to bring a great deal of fun and joy in their music, often highly rhythmic compositions, mixing the looseness of a jam band with the instrumental skills of the real professionals. One of their great successes is still the "Mackie Burnette", from "Lapis Exilis", without a doubt one of the funkiest jazz pieces ever (in the same league as Dave Douglas' "Mad Dog"). But when I listened to this album, I was a little disappointed. The fun that was characteristic of their music evolved into a kind of stylistic need to become funny, a world of difference which does not always fit well with music. Some of the pieces, such as the opener "Mooze & Grizzly Bear's Ville", or the Chinese sounding "Brothers Of Heliopolis", have silly themes. "Pearl's Blues" is a traditional blues, but on which the alto is trying to weep, but more in the style of Stanley Laurel than in real earnest. The last piece, "Dew Of May" is a slow ballad, with lots of reverb, ending the album in totally different stylistic tone, and one that is played much better by other musicians. But in between, there is some good stuff: "Reptoid Alliance" is a nice funky piece, the title track is slow, rhythmic and hypnotic, and "Conotocarius" adds total mayhem to the album, a welcome change. It seems the band has lost its direction a little bit, but their basic approach is still one to cherish.

But for those interested : watch these great clip with their "The Mackie Burnette"

Can U Do The Mackie Burnette?