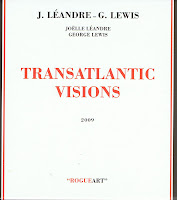 Joëlle Léandre is a loner, walking the earth with her bass, looking for other people to play with, because she likes new interactions, she likes surprises, she likes musical dialogues, improvised, with no path to follow, meeting, listening, fusing, yet with both parties keeping their character, keeping their style, but at the same time finding sufficient common ground to enter into something valuable. Something not heard before, creating new opportunities for notes, new opportunities for sounds ... to flourish. Here she meets with trombonist George Lewis, with whom she shares a background of playing with people like Braxton, Lacy and Les Diaboliques, Léandre's trio with Irène Schweizer and Maggie Nicols.

This album was recorded live at the Vision Festival XIII, in New York in 2008, hence the title. But the title refers equally well to the music itself. Both musicians push the boundaries of their instruments and inventiveness, conjuring up sounds and sound experiences : harsh, plaintive, bluesy, screeching, wailing, scratching, growling, shouting ... new sounds yet somehow familiar in their as yet unspoken emotions, brought to life unexpectedly, surprisingly through some sparse notes, some bowed strings, wind through tubes. In the hands of lesser players, this endeavor would fail, but their skills are such to make it an intense and captivating encounter, played with a depth that most musicians can only dream of. This is music with the right attitude. If you want to play with this level of musical openness, you have to dare to be vulnerable and tear down your own defenses, including in the long solo moments. Léandre and Lewis do not perform to entertain, they do not perform to show their skills, they perform to genuinely interact musically. In this sad era of fake and kitsch, this album offers a great antidote of refreshing authenticity.