I recently reviewed two new LPs by the avant-garde label Brokenresearch. Here are some more releases, but then CDs. I am usually not a great fan of the too minimalistic approach on which instruments barely lift notes above or just below a surface of drones. Yet the label's approach is of interest because of the strong unity in musical vision it brings, even if the settings are very varied. Daring, courageous and visionary. But it's not jazz. 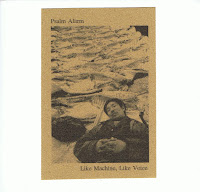 The music on this album is played by Zach Wallace on bass, Ben Hall on percussion, Chris Riggs on electric guitar and Hans Buetow on cello, but the listener who can discern these various instruments on the album should receive an award. The music sounds like endless notes played with slight variations around a tonal center over which the other instruments add texture and superimpose sounds basically, functioning like ripples on water, extending, broadening, disappearing. The overall effect is eery, dark, frightening, industrial almost, but also sophisticated. It is not noise. Noise repels the listener. Here the music has some strange appeal, something fascinating that lures you out of your daily routine, wakes up the dark side of your subconscious. That's the power of this music. Despite the minimalism, and the organized sound that to many listeners will not qualify under the term "music", it has a strange emotional power and intensity, and one that is kept throughout the album. But it is not jazz, for sure. 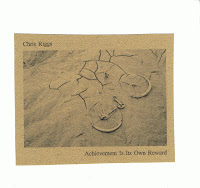 Chris Riggs plays solo electric guitar. Again, as with the other albums, it does not sound like an electric guitar. It sounds primarily like percussion, with some whistling sounds at the beginning. Could it be that the wrong disc ended up in the CD sleeve? Is this guitar? Since none of the CDs contain any information at all, that might well be possible. Each of six tracks is exactly five minutes long, exactly, making this also a short album. I am at a loss of what to think of it, and that's good. Avant-garde that meets expectations does not really meet expectations. 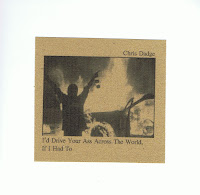 In the same series, Chris Dadge plays solo percussion, in two pieces adding up to approx. 30 minutes. You get normal percussive sounds, but also scraping, rumbling, clattering sounds and all variations around that. In stark contrast to most jazz, and much in line with the other music of the label, it's all very downtempo, with the musician taking his time to explore and expand and create an atmosphere that shifts expectations of what drums and music should sound like.

It is not really my thing. In all, utterly bizarre stuff, but worthwhile. Surely, it will not be to everyone's liking, but then, who cares? At least the musicians don't seem to care.