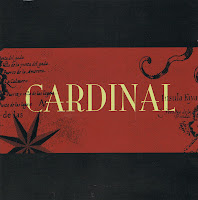 I was quite enthusiastic recently about EASilence, a collaboration between Mirio Cosottini on trumpet and Alessio Pisani on bassoon and contrabassoon. And now, some months later, their new project is already out, and again with staggering results. The duo has become a quartet, with Andrea Milani on drums and Tonino Miano on piano. The approach is different, yet keeps the same sensitivity and inventiveness.The presence of piano and drums give the music a clearly more jazzy feeling, but not always. The percussion and the piano sometimes add sparse notes to complete eery soundscapes, closer to new music.

The band's name comes from the four "cardinal points", (and not the senior ecclesiastical official of the catholic church). It was chosen to reflect a multidirectional sound, a kind of geography in which the way has to be found, in which no roads are available, it's the world before borders and lines, yet real nonetheless. The musicians converge, rotate around a central point, then diverge and go back their own way.

The music is as accessible as it is adventurous, cerebral and emotional, programmed and spontaneous, it's jazz and classical, recognizable yet never heard before, grave and light-footed, but with an aesthetic beauty and sensitivity that can only be admired. So is the musicianship: listen to the quality of the sounds, the ideas, the interaction but also the restratint they show. So is the artistry in the variations of the compositions, from the deeply sad "Bianca" to the fun "Jump-U-Funk" over the eery "Exmod 1", yet strangely enough not straying from the overall vision: it all fits nicely. Exceptional!