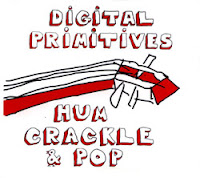 Two years ago this trio released the rather groundbreaking record "Digital Primitives", all fun and great music, and their sophomore album continues in the same vein: all fun and great music. The creators are Cooper-Moore on a wide variety of self-invented instruments such as diddley-bow, mouth bow, bango, (and voice), Assif Tsahar on sax and bass clarinet, Chad Taylor on percussion. The band's name is quite apt, because the music is simple in essence, based on the blues, on funk, on the jazz tradition, but like this music, the essence is not in the complexities of harmonies, but on the quality of the performance combined with the entertainment factor. And to be sure, all three musicians shine on this album. Chad Taylor's wonderful drumming on the vocal track "People", or Tsahar's piercing wailing on many tracks, and Cooper-Moore's wild instrumental ideas and sounds can do nothing more than create awe and pleasure.The digital aspect is hard to find, but their own musical joy in primitive, almost tribal or organic sounds, is absolutely fabulous, whether the sweet guitar harmonies and sax on "Love Truth", or the "The People", a kind of social rhythmic rap reminiscent of the directness of Gil Scott-Heron's "The Revolution Will Not Be Televised", but they also bring "Somewhere Over The Rainbow", with sweet sax over weird, dark animal-like sounds as accompaniment, extracted from Cooper-Moore's didley-bow. Part of the music was inspired by a journey Tsahar and Cooper-Moore made to Ethiopia for the “Festival of a Thousand Stars”, where more than 50 distinct local cultures presented their music. If you stay on the beaten track, you will never go anywhere new. Well, these guys help you into a novel musical experience.

This album is amazing, as you've noted. I don't know where I've been, but I just discovered Cooper-Moore as a result of his appearance on Darius Jones' new record. Now I'm obsessed. In a couple weeks I'll be interviewing him in New York for an upcoming episode of The Jazz Session.

Make sure you hear,Cooper-Moore's solo piano album,"Deep In The Neighborhood Of History And Influence" on Hopscotch Records.It's one of the "best" solo piano albums ever recorded:NO HYPE.

"The digital aspect is hard to find..."
The fingers!

The fingers! of course - as a non-English native this pun eluded me.
Thanks for clarifying.