The nice thing about being a fantastic musician, is the chance you get to play a lot, in various line-ups, clubs and regions, possibly leading to lots of gigs and the possibility for new releases. So it also goes with Ken Vandermark who no longer needs to be introduced. What sets him apart from many others, is his incredible dedication to his work, and the loads of work that he puts in every performance and release. Even if improvisation is his key strength, he does not leave much to chance either, while willing to take risks at the same time. Some of his ventures are less successful, but many of them are excellent. He releases so much that he can't even keep track of them on his own website. But it's also the reviewer's nightmare : how to cope with all these new releases, how to listen to it all with the attention the music deserves, how to adequately describe their value, musical differences, and possibly even recommendations?

Two years ago I never got to review the "Alchemia" 12 CD box, because it took so much time to listen to it all. So, again, I haven't listened to all these albums as I should have done, but waiting for a couple of months will not help you either as a listener. I can only announce these CD's existence.

Let's give it a try. 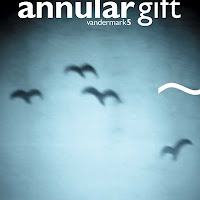 Possibly Vandermark's best known band, with the leader on tenor sax and Bb clarinet, Dave Rempis on alto and tenor, Fred Lonberg-Holm on cello, Kent Kessler on bass, and Tim Daisy on drums, it is also the band with the most composed material. All pieces have composed themes, are highly rhythmic (and how!), that are also the absolutely delightful backbone for the whole band to demonstrate their improvisational skills. The arrival of Fred Lonberg-Holm on cello and electronics some years ago clearly gives a new flavor to the band, especially when he plays arco and in counterpoint to the horns, as in "Second Marker", or on wild almost electric guitar-like excursions as on "Cement". This is one of the best Vandermark 5 albums, with a relentless drive all through the album, alternating traditional jazz unison arrangements with absolutely avant-garde improvisations and detours, with lots of body, but not the really danceable kind, with lots of soul, but then of the tormented kind. The way these five musicians interact is among the best of that can be heard, without a doubt. They build complexities on complexities, even made more difficult by the breakneck speed of some of the pieces, but it's all dealt with in the most organic and natural of ways. This music will surely not only be the envy of every musician, but also of every composer and arranger. 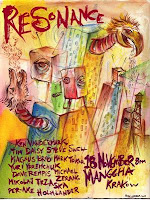 I was full of praise for "Resonance", a vinyl LP that was released earlier this year on the Polish Not Two label. And well praise leads to repeat behavior, and the result is this 10-CD box, with performances that were recorded in Krakow, Poland between November 12 and 16, 2007, and in Lvov, Ukraine on November 17, 2007.

The band consists of Vandermark on tenor, baritone sax, and clarinet, Magnus Broo on trumpet, Tim Daisy on drums, Per-Âke Holmlander on tuba, Dave Rempis on tenor and alto saxes, Steve Swell on trombone, Mark Tokar on bass, Mikołaj Trzaska on alto sax and bass clarinet, Yuriy Yaremchuk on tenor, soprano and bass clarinet, and Michael Zerang on drums. The line-up changes over the week of playing, with surprisingly enough Vandermark himself often not even part of the band, leaving the sax part to Rempis, Trzaska or Yaremchuk.

The music itself is a pure delight of jazz, with an excellent balance of strong compositions with lots of references to the entire jazz history, with on the other hand far-reaching and wild excursions into more uncharted territories, but the whole thing is a pleasure to hear, and the musicianship demonstrated is among the best you can hear, whether crazy, refined, bombastic or subtle, emotional or just plain chaotic. The great thing is that this band, even after the pure chaotic technical acrobatics in the stratosphere, always falls back right on its feet, as if on cue.

The first seven CDs are all "small group" improvisations, with disk 6 offering close to thirty minutes of drum duets between Zerang and Daisy.On some parts you have the horns without bass or drums. All various aspects of the same approach: fun and great.

Disk 8 has almost the entire band (minus Zerang).

CD 9 and CD 10 are played by the entire band, with the latter an exact copy of the earlier released "Resonance" LP. 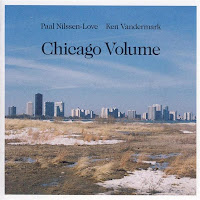 If I'm not mistaken, this is the fourth duo release between Vandermark and Paal Nilssen-Love on drums. The latter seems to enjoy the format, having released duets with John Butcher, Joe McPhee, Mats Gustafsson. The first piece brings Vandermark in his usual highly rhythmic, almost funky improvisation, with Nilssen-Love equally playing up a storm. Things slow down afterward and become real sensitive on the second track, with the occasional outburst of power and anger, and more abstract on the third piece, with Vandermark taking up his bass clarinet on both tracks. The last piece is called "Mort Subite" or "sudden death", the name of a Belgian beer and also a famous café in Brussels.

Another CD of the duo is in the making on the same label : "Milwaukee Volume". 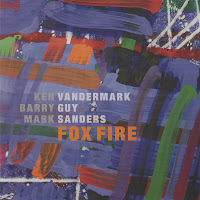 This double album brings the unusual combination of Vandermark's fierce and soulful sax with two of the most prominent figures of the European free improv scene, bassist Barry Guy and drummer Mark Sanders. The nice thing is that it shows Vandermark's more adventurous side, the one that can move freely and without any compositional or structural constraint, except for the interaction with the two other musicians. 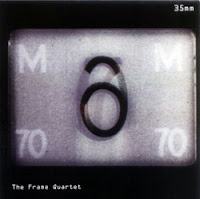 The Frame Quartet is a new band in Vandermark's catalogue, a kind of alternate V5, with Tim Daisy on drums, Fred Lonberg-Holm on cello, Nate McBride on bass, and of course Vandermark on sax and clarinet. The music is less structured or composed than The Vandermark 5, with an infusion of ideas that come from other musical genres, including film and underground rock, but influences from the blues or the avant-garde are also obvious. As usual, the pieces are dedicated to the composers' musical heroes : Peter Brotzmann, Han Bennink, Fred Van Hove, Ennio Moricone, Jimmy Lyons, Steve Lacy and Merce Cunningham.

So, what can I recommend?

Watch the Vandermark 5 in Lubljana (Slovenia) earlier this year.

"Alchemia" contained 12 cd's! :)
I think it took me about half a year to fully grasp the breadth and beauty of the music on that box set. I also have the new V5 and agree it's exellent.And looking forward to the new box set. If it contains the imposing quality of the LP, I'll be a very happy man

Guy, of course it's 12 CDs, I'll correct immediately.
Thanks
stef

Ken Vandermark seems to be producing ssssooo much music it's often hard to keep up with his activities. I only wish that he'd come through Belgium more often - if at all!

The 'Alchemia' box set looks very interesting, any ideas where to find it - the Médiathèque of course for listening.

I'm impressed with your reviews. Some web reviews I've seen of Vandermark material have left me to wonder if the reviewer even listened to the CDs (apart from snippets on amazon.com). Clearly you've been doing some active listening and thinking as well.

I've followed Ken's work since 1994 when I first started watching him play live in Chicago, and it just keeps getting better.

I'm also impressed with how you managed to get your hands on the Resonance 10-CD set. I ordered mine a few weeks ago but it still hasn't arrived in the mail!

And finally, if you enjoyed the Alchemia Box set, there are recordings floating around from the V5 Polish tour in November 2005 that will really knock your socks off. One performance is available in bits and pieces on Youtube.

Fox Fire is a revelation. The lack of structure really puts KV out on a limb, and he succeeds masterfully. For those naysayers who used to complain that he was a great writer and organizer but couldn't improvise, one listen to this is all the proof you need.

The 10th cd in the box is not the same as the LP, the material on LP comes from concert in Lviw Ukraina , while the material on cds is from Krakow, recorded 1 day after.