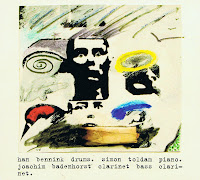 Han Bennink is without a doubt one of the best and also most entertaining drummers in the free improv scene. I should have gone to a concert* by him tonight with this same trio, with Simon Toldam on piano and Joachim Badenhorst on clarinet, but for one or the other reason I couldn't go. Anyway, this is their new album, and one on which the trio shows their broad background in jazz, ranging from blues and swing to wild excursions into uncharted territories. Badenhorst is a promising young Belgian musician, currently based in New York, Toldam an equally talented young Danish pianist. Together, they are younger than Bennink, yet that would be a totally irrelevant comment if it didn't characterize Bennink so well: young in spirit, and really open to learn from the young too. Whether it's the sad Ellington tune "Lady Of The Lavender Mist", or the wild madness of "Myckewelk", you get mature quality or childish fun. And Ellington does come back, with an adventurous rendition of "Isfahan" and the lightly dancing "Fleurette Africaine". The other improvised tracks such as "Reedeater" and "After The March" show a more artistic and slightly darker side of the trio, but the contrast does not disturb the album's unity. An entire album in that style would have received my preference though. The trio is joined by Qarin Wikström on vocals for the melancholy last track "Parken". A really nice album, full of creative craftmanship, respect for music and an inherent sense of fun and joy in every note being played.

*Actually the whole evening was a tribute to Bennink with the release of a biography of him ("De Wereld Als Trommel" - the world as a drumkit), a film about him, ("Hazentijd"), the presentation of this new CD, and various concerts.

The art work of the CD is by Bennink himself.

Han Bennink was on Dutch television on Tuesday in the context of all this tribute work. The world is a drumkit indeed.

I picked this LP up last night at a Third Man Trio show here in Philadelphia. I haven't listened to it yet. Any word on if the bio is gonna get an English translation?