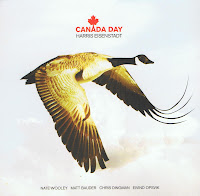 After his magnificent African-inspired album "Guewel", Canadian drummer Harris Eisenstadt returns to his native soil, celebrating his home country. The band further consists of Nate Wooley on trumpet, Matt Bauder on sax, Chris Dingman on vibes, Eivind Opsvik on bass, in short some of the best young musicians around. In stark contrast to some of his previous albums, the music here is composed, and slightly left of center. I'm sure that many mainstream lovers will also enjoy this one, yet the album has at the same time a kind of unpredictability, a freshness of approach together with an enveloping warmth that is quite unusual. And that sensitivity is to be found in the compositions, the playing and in the interaction. With this band Eisenstadt not only brings a synthesis of many jazz subgenres (from the cool vibe sounds of the sixties to the kind of more modern Dave Douglas approach), but he brings it a step further, showing how modern music can be at the same time clever, rich in texture and emotionally intense. Credits go the whole band, who really play as one.