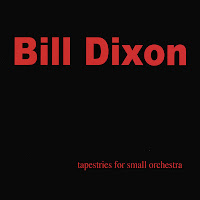 Trumpeter Bill Dixon's music has always been hard to classify: rooted in jazz, with the adventurousness of the avant-garde, open for the use of electronics, and with the composed and structured approach of classical music, while still leaving sufficient space for improvisation. Last year he released a stellar album, "Seventeen Musicians In Search of A Sound: Darfur", and this one is at the same high level throughout, if not better even.

The musicians are almost the same, but then in a trimmed down version, with no less than five trumpet-, cornet- or flugelhorn-players : Bill Dixon, Taylor Ho Bynum, Graham Haynes, Stephen Haynes and Rob Mazurek. The band is completed by Glynis Lomon on cello, Michel Cote on contrabass and bass clarinet, Ken Filiano on bass, and Warren Smith on vibes, marimba, drums, typani, and gongs.

Even if this is a solid horn section, most of the music is quite open-textured, with initially a relatively limited number of instruments playing at any given time, duos, trios, quartets, with - no surprise here - almost always a trumpet in the lead role, but then at certain moments the horn section locks in for a huge swell of sound. That being said, the improvisations are not what you would expect: Dixon's overall carefully crafted sound dominates the improvisations, with few notes being played, and themes, in so far as you can call them like that, slowly evolving, with the horns in different groups acting in counterpoint. The music becomes more dense with each track, with the whole small orchestra playing together to create a unique soundscape.

Like on his previous album, the overall mood is slow, dark, austere and somber. No reasons for joy to be found. The flow of the music is interspersed with radical voices coming up, sometimes to take over the scene, sometimes only to let out a few cries, and then dissolve again into the background murmur. Yet the soloists can be very frantic, having urgent stories to tell, often brilliantly accompanied by Warren Smith, who takes a lead role on vibes in the beautiful "Silvers - Sand Dance For Sophia", or the solos are sad, melancholy or expansive. On some pieces, hardly any improvisor comes to the fore, with electronics and the dark background sounds conjuring up images of wild primeval times, when out of universal and unclassifiable existence, suddenly individual voices and life emerge. The whole album is actually one large composition, broken down in eight tracks, with each some distinct characteristics yet all part of the same sound.

Many modern music alienates and shocks, and it may take some time before you get used to certain aspects of it. Here it's the opposite: you get sucked into a universe that is different, weird, inhospitable, mystic, yet feel likes home. As a listener you feel a deep recognition of what is being played. It has such a universal value, that you can relate to it on some very deep and fundamental level.

And that is the absolute marvel of Dixon's music : it is unclassifiable, it is beyond what you expect even from music. An ambitious genre-bending masterpiece. And a spectacular listening experience.

It's a double CD with DVD. Since I downloaded from eMusic, I cannot comment on the DVD, but I would say it's worth having the full hard copy of it.

As for the DVD, I found it fascinating. It consists primarily of three things: Dixon speaking (either to the band or to an unseen interviewer); the band speaking with one another about Dixon (without Dixon present); and rehearsal/performance footage from the recording session.

As someone who wasn't familiar with Dixon's work, I found the DVD to be a useful primer that added to my enjoyment of the music.