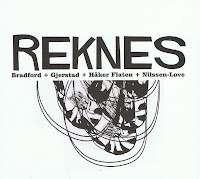 Bobby Bradford on cornet, Frode Gjerstad on sax, Ingebrigt Håker Flaten on bass, Paal Nilssen-Love on drums, These four men have played together in various formats and constellations: Gjerstad and Bradford have three quartet albums, and they play together in the Circulasione Totale Orchestra. Here they are captured live at the Molde Festival in Norway for four improvisations of between ten to seventeen minutes, offering the musicians enough time to do their thing. It starts quite rhythmic, with Bradford leading the tune in his own melodious way, then Gjerstad comes in on clarinet, all high and screeching, forcing Bradford into more adventurous regions, yet he sticks to more free-boppish themes, and when Gjerstad picks up his sax for a slower moment, the complementarity between the two musicians becomes even clearer, yet it adds to the overall texture : the raw, maverick tones of Gjerstad versus the bluesy velvety sound of Bradford. One tune? Sure enough! Both horn-players can imbue their solos with the same emotional content. But the nice thing is that all four musicians give each other lots of space, listening well, and playing in function of the music, and well, also in function of Bobby Bradford, who clearly occupies the spotlight on all four tracks, with Gjerstad taking a step back more often than not. The third track has Bradford taking the most bluesy solo cornet intro I've heard in years, for what remains the most down-tempo piece of the album. And Gjerstad takes the lead in the last piece, opening together with Håker Flaten, again full of emotional tension and sensitivity. Four great musicians. Not earth-shattering or ground-breaking, but free jazz in the best tradition. And the audience is enthusiastic too.