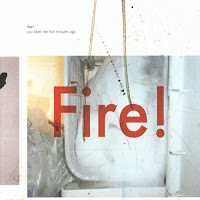 "Fire!" is Mats Gustafsson on saxophones and Fender Rhodes, Johan Berthling on bass, electric guitar and Hammond organ, and Andreas Werliin on drums. The first piece is built around a repetitive bass vamp, a solid anchor point for the drums to go haywire and Gustafsson to have a no-holds-barred sax solo, screaming and wailing as if his life depended on it, yet ending all smooth and gently. The second piece, "But Sometimes I am", starts with a slow acoustic bass figure around which Werliin adds percussive depth on his cymbals. After some four minutes the sax joins with some gut-wrenching multiphonic sound, full of distress and sadness, a sound which is so unmistakably identifiable as Gustafsson, so human and authentic that it's really frightening, and - suprise - his sound merges into some high-toned singing by Mariam Wallentin, on a true psychedelic backdrop reminiscent of Pink Floyd's "Careful With That Axe, Eugene", but then the electronics set in as the speed increases, moving to an inevitable paroxysm we know from the early Floyd. Absolutely mesmerizing. "Can I Hold You For A Minute", starts with a rock-ish mid-tempo beat, with bass and drums laying a repetitive pattern for the electric guitar and keyboards to build a hypnotic wall of sound, through which Gustafsson's piercing sax comes tearing through, as if his soul was condemned, for ever.

The last track starts light-footed, with some handclapping accompanying a repetitive sax over an odd 2/4 rhythm, of which the tempo increases, a little too joyful and too much of a contrast with the carefully built up atmosphere of the previous tracks.

This is not fusion. It is not even progressive jazz rock à la Soft Machine. It's the endless psychedelic and epic - as yet unpolished - sound mastership of the early Pink Floyd in a more modern form with the magnificent voice of Gustafsson to add emotional power.