Ever since Sonny Rollins'"Way Out West", the sax trio is possibly the most popular small ensemble after the piano trio. The horn's expressivity, volume and range explain its attractiveness for players and listeners alike, because it can carry the weight of a trio setting. That being said, it still requires creativity and a good sense of how to build tension to keep things captivating for a whole album. 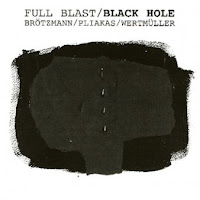 Recorded in March 2008 at Radio Studio Züric, the titel of the album defines the music quite well, although on the second track, "Suzy", Brötzmann plays quite softly, melodically and sensitively over the wild powerful bass of Marino Pliakas and the unrelenting drumming of Michael Wertmüller. But don't worry, Brötzmann fans will find plenty to enjoy here, but it must be said, the quieter parts, as on "String", or on "Protoneparcel" on which he plays tarogato suit him quite well, showing a more sensitive and subtle face. All track titles are related to the extreme experiments of particle physics that took place at CERN in Switzerland last year, in search of the Higgs Boson particle, an experiment which, some claimed, could have devastating results including the creation of a black hole in which everything (EVERYTHING!) would disappear, an inspiring concept to Brötzmann, Pliakas and Wertmüller, who are the ideal band to accompany this event, in analogy to the string ensemble that kept playing while the Titanic went down. Strong double CD! 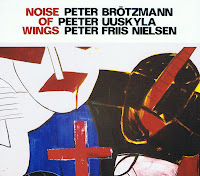 In comparison, this re-issue on Jazzwerkstatt of a no longer available Slask release of 1999, is a little more ferocious and muscular. Peter Brötzmann is accompanied by Peeter Uuskyla on drums, and Peter Friis Nielsen on electric bass, as on a series of other albums (Medicina, Flying Feathers, Live At Nefertiti). Like on Mokuto, Friis Nielsen's little percolating bass sounds often determine the overall tone of the piece. Brötzmann is wild as you would expect, but not violent for violence's sake, yet full of expressivity, passion and fire. Excellent re-issue. 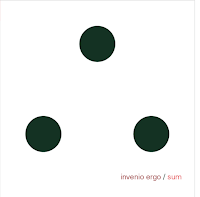 Master drummer and improvisor Eddie Prévost is joined by Ross Lambert on guitar and Seymour Wright on alto, for two long pieces, together more than eighty minutes long. The title is a reference to French philosopher Descartes' famous sentence "Cogito Ergo Sum", or "I think, therefore I am", yet changed here into "I invent, therefore I am". Even if not quite that accessible during a first listen, its open textured approach, and the musicians' listening skills and subtle interaction make this a strong performance. 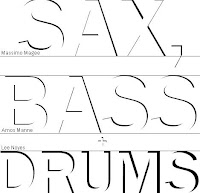 Weird and totally improvised music, with one long track of thirty-seven minutes, with Massimo Magee on "amplified, feedback and acoustic prepared and unprepared tenor saxophone", Amos Manne on bass, guitar, whistles, and pipes, and Lee Noyes just plays drums.The improvisation, aptly called "Three's Company", is very much in the free improv tradition, without clear rhythmic or any other patterns, creating sonic intensity and interaction very much in the moment itself. Not bad at all.

The music can be downloaded free of charge from their website. 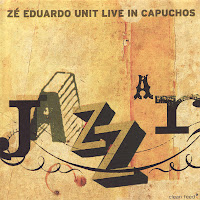 Light-footed modern and free jazz by this excellent Portuguese trio, led by bassist Ze Eduardo, with Jesus Santandreu on tenor saxophone and Bruno Pedroso on drums. The compositions are very varied, full of creative twists and turns, but then they get unraveled to their essential core, improvised upon in the best free sense, and falling back to its more structured form. Sensitive playing and quite accessible. 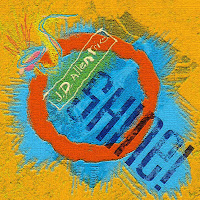 This trio is possibly closest to mainstream of the whole list here, often hesitating to move into fiercer, more free environments, yet always falling back on the structures and patterns. That being said, the playing and the compositions are quite strong. J.D. Allen on tenor saxophone, Gregg August on bass and Rudy Royston on drums. Allen's playing is as warm as a southern breeze, his improvisations very melodic.

Thanks very much for the review, Stef, glad you enjoyed it!

For those going to the [Array] website to look for the "Sax, Bass and Drums" release you may have to scroll down the page a bit, or just follow this direct link:

Yes, JD Allen is one of the better mainstream acts out there. As you mention it's not 'totally' free, yet there's some excellent music coming from this trio. I've heard some of the live concerts on the radio that have some very exciting music ..... and it's not at all pretentious, just serious music with a fearsome swing.

If it's still online check out this concert at NPR.
http://n.pr/fPE09M