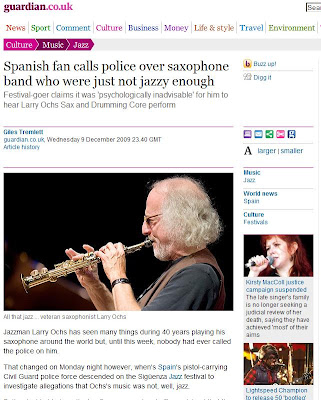 I thought the concept of the Jazz Police was a great invention by Leonard Cohen, and here is one stanza of his lyrics.


But they're real. They exist!

And none other than Larry Ochs, widely acclaimed artist, and highly recommended by your humble servant, was the victim of the jazz police. While performing in Sigüenza, near Madrid, on Monday this week, a concert-goer called the police to judge whether or not the music Larry plays is jazz, claiming his money back.

"According to a report in El País newspaper yesterday, the khaki-clad police officers listened to the saxophone-playing and drumming coming from the festival stage before agreeing that the purist might, indeed, have a case", writes The Guardian.They referred the case to a judge.

Read the full article in The Guardian or El País for some hilarious moments.

True, you can argue about what is jazz and what is not jazz. But taking risks is not only the task of the artist. It's also part of the listener's role.

In any case, I truly hope that it will give Larry some wider exposure. Getting such a long article in El País and in The Guardian does certainly not happen frequently to"jazz" musicians.


"Can you tell me why the bells are ringing?
Nothing's happened in a million years
I've been sitting here since Wednesday morning
Wednesday morning can't believe my ears"

You can also judge for yourself : here is a piece of the performance, with Satoko Fujii on piano, Natsuki Tamura on trumpet, Scott Amendola and Donald Robinson on drums.


List of recommended albums by and with Larry Ochs :

I know that I am quite generous/enthusiastic with my ratings, but four out of eight albums with a five-star rating is even by my standards exceptionally high. Check them out!

Thanks to Foka for sharing this story.